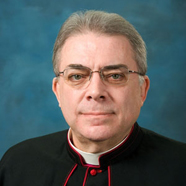 Photo Caption: Msgr. Steven P. Rohlfs has been elevated to the rank of Protonotary Apostolic, the top level of monsignor and considered the highest honor bestowed upon a priest.

Pope Benedict XVI has elevated Msgr. Steven Rohlfs, a priest of the Diocese of Peoria now serving as rector of Mount St. Mary’s Seminary in Emmitsburg, Md., to the rank of Protonotary Apostolic.

The papal designation is the top level of monsignor and considered the highest honor bestowed upon a priest.

Bishop Daniel R. Jenky, CSC, announced the designation “with great joy” in a Feb. 14 letter to Catholics of the Diocese of Peoria after receiving notice from the Secretary of State at the Vatican.

“Not only is this a great honor for him, but for our entire presbyterate,” said Bishop Jenky. Because of Msgr. Rohlfs’ duties at the seminary, a diocesan celebration will take place at a later date.

Msgr. Rohlfs’ designation with this rare papal honor — he is the only active American seminary rector to have received it — marks the fifth time in the last seven years that a priest of the Diocese of Peoria has been granted the title. Msgr. Charles Beebe was elevated to the rank of Protonotary Apostolic in 2011; Msgr. Paul Showalter in 2009; Msgr. Albert Hallin in 2007; and the late Msgr. Raymond Boyle in 2006.

“I am truly touched by the thoughtfulness of the Holy Father and Bishop Daniel Jenky of Peoria,” said Msgr. Rohlfs, 63, who formerly held several leadership positions in the Diocese of Peoria including vicar general, chancellor and vocations director. He has been rector of Mount St. Mary’s Seminary — the largest seminary in the United States — since early 2005.

“I consider this as much an honor given to the seminary as given to me,” Msgr. Rohlfs added in a Feb. 18 press release from Mount St. Mary’s. The seminary has more than 170 men studying for the priesthood from 28 dioceses, including 29 from the Diocese of Peoria.

“His vision in guiding the seminary’s mission of intellectual, human, spiritual and pastoral formation, and the continued success of our seminarians, is a direct result of his leadership and priestly ministry,” said Thomas H. Powell, president of Mount St. Mary’s University.

LEADERSHIP POSITIONS IN DIOCESE
A native of Lincoln, Msgr. Rohlfs is a theologian who has written numerous articles in his field of medical ethics, healthcare, and family planning. He is also a popular retreat master and workshop facilitator for clergy and laity.

He attended St. Meinrad Seminary in Indiana and graduated from the Higher Institute of Philosophy at the Catholic University of Louvain, Belgium, in 1971. After completing his seminary studies for the Diocese of Peoria at Mount St. Mary’s, he was ordained to the priesthood in 1976 by Bishop Edward W. O’Rourke. He later earned licentiate and doctorate degrees in moral theology from the Angelicum in Rome.

From 1987 to 1992, he was rector of St. Mary’s Cathedral and pastor of St. Peter’s Parish in Peoria. In 1993, he became pastor of St. Philomena’s Parish, Peoria, and later that year was named a prelate of honor with the title of monsignor.

While serving as vocations director in the 1980s and early 1990s, Msgr. Rohlfs had a role in recruiting and forming some of the largest ordination classes in diocesan history. In 1999, Bishop John J. Myers appointed him to the posts of vicar general, chancellor, and moderator of the curia.

He is a former president of the diocesan Presbyteral Council and has served as director of the Society of the Propagation of the Faith, Holy Childhood Association, mission director and director of cemeteries in the diocese. He was episcopal vicar for healthcare from 1994 to 2005, and in 1999 was elected administrator of the diocese following the appointment of Bishop John J. Myers to Newark. He served as administrator for several months until the arrival of Bishop Jenky.

Msgr. Rohlfs was named a Knight Commander of the Holy Sepulchre in 1997 and a Knight of the Sovereign Military Constantinian Order in 1999. He also holds a master’s degree in dogmatic theology and liturgical theology from Mount St. Mary’s.

Other diocesan priests who have been elevated to the rank of Protonotary Apostolic include the late Msgr. Clarence Hettinger, Msgr. C.B. Motsett, and Msgr. Edward Duncan.

Persons wishing to send a congratulatory note to Msgr. Rohlfs may do so at this address: