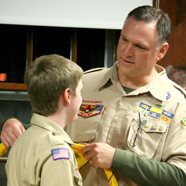 There’s no denying his love for all things Scouting. He also cares deeply about the well-being and spiritual growth of the young men in his charge at Troop 109 at Sacred Heart in Moline, where he serves as Scoutmaster, and it hasn’t gone unnoticed.

For those reasons and more, Graves received the St. George Emblem from Bishop Daniel R. Jenky, CSC, at the annual Diocesan Scout Mass at St. Mary’s Cathedral in Peoria. The highest award in Scouting, it recognizes those “who have made significant and outstanding contributions to the spiritual development of Catholic youths through Scouting.”

A member of St. Maria Goretti Parish in Coal Valley, Graves is a project manager in information technology for John Deere. He has been married to his wife, Kathy, for 23 years and they have three children: Alison, 19, attends Simpson College in Indianola, Iowa, while Ben, 17, is a junior at Alleman High School in Rock Island, and Nathan, 14, is an eighth-grader at Seton Catholic School in Moline.

The whole family has been involved in Scouting, in addition to serving their parish. Kathy is an extraordinary minister of Holy Communion and with Nathan helps to set up the parish center for CCD classes, funerals and large events at St. Maria Goretti. Bob is on the parish’s confirmation core team, and Ben is on the core team for the St. Maria Goretti/Mary, Our Lady of Peace (Orion) youth group.

Last week, Bob Graves shared his thoughts about what makes Scouting so special with The Catholic Post.

Were you involved in Scouting when you were growing up?

I wasn’t. . . . In recent years, my mother told me that was because there wasn’t a strong pack or troop in Newton, Iowa, where I grew up.

—
Talk about your involvement in Scouting now. How many years has it been and what roles have you played?

I have been involved with Scouting for about 11 years, since my oldest son was in first grade. I have been den leader, assistant den leader, Cubmaster, and committee chair for Pack 109 (chartered by Seton Catholic School in Moline). I have been assistant Scoutmaster and Scoutmaster for Troop 109 (chartered by Sacred Heart in Moline). I took over as Scoutmaster in August of 2012. . . . I have also been involved at the district and council level as commissioner, assistant district commissioner, district committee member, and program director for Cub Scout day camp.

Why did you get involved?

Before my kids were old enough for Scouts I’d known a few Eagle Scouts. I thought they were “stand up” kind of guys and men of integrity. So I thought it would be good to get my kids involved. My daughter did Girl Scouts for several years (until their troop leaders stepped down), and my boys have been involved since they were in first grade.

I started slow because I was not very familiar with Scouting, but as I grew more familiar I found ways that I could be more helpful. Within a couple years, I stepped into leadership roles of the pack.

Who has influenced you as you pursued Scouting?

There have been many who have influenced me. . . . My wife has influenced me by encouraging me and helping to give me the time I need to dedicate to Scouts. She has contributed a great deal in building a quality program for our pack and troop.

My kids certainly influence me. Long ago I decided that I was not going to be the guy that looked back on my life and say that I didn’t spend enough time with my kids. I’ve had several bosses that have shared that regret with me. . . . I know that my kids aren’t going to be able to say that their dad wasn’t there when they were growing up.

My faith certainly influences me. I have been a committed Christian since junior high and I had a great group of friends in high school that were committed Christians. I want to be able to share my faith with my children as well as others. That’s why I was a youth minister for several years (at St. Mary’s in Moline) and that is why I am committed to bringing my faith into my role as Scout leader.

What does Scouting provide that’s important for boys (and girls) to learn? How does it change young lives?

A well-rounded Scouting program will provide a well-rounded experience for Scouts. I could get out the Scout handbook and tell you about the Scouting method, but for me it can be fairly simple: Scouting skills, achievement, and leadership.

By Scouting skills I mean the stereotypical skills like camping, knots and survival skills, but also cooking, academics (photography to biology to astronomy), citizenship and even hygiene. I think it is important for kids to learn to achieve — not just to be given accolades (“everyone is a winner”), but to figure out what needs to be done and be successful at it. Whether it be rank advancement or merit badge achievement, the Scouts learn dedication and perseverance. A big part of my job is to help put the Scouts in a position where they can achieve, support them when they fail, and celebrate with them when they succeed.

For me, leadership has been a main emphasis. Others in our troop have emphasized outdoor experience or advancement or high adventure. We work well together to give the Scouts a good program. It’s important for me to not only expect the Scouts to be leaders, but to teach them how to be leaders. Not everyone is a natural leader, but everyone can learn how to lead effectively.

What is the most important thing you’ve been able to do as a leader in the Scouting program over the years? What do you hope the young people walked away with?

As I think about what has happened, I know that I’ve accomplished nothing alone. Whether it be building up a struggling Cub Scout pack or revitalizing Cub Scout day camp or re-focusing the troop on leadership and achievement, I’ve done none of it by myself. I have been a part of a great group of people that have been willing to spend the time and give their talents toward making Scouting better. . . .

I hope and pray that as these Scouts grow up, they will be men of integrity and faith and contribute in a very positive way to their community. I hope they will see that they can achieve anything they want. And I pray that they will carry on and encourage others to live that same way.

The St. George Emblem is a national honor — how does it feel to receive this kind of recognition? What does this mean to you?

Although I’m not in this to be recognized and rewarded, it is still nice when it happens. I know that the St George Emblem is not given because I’ve satisfied a list of requirements. I feel blessed to have been nominated because that means that I am sharing my faith and helping others grow closer in their relationship with Christ. Ministry is very important to me. I am grateful that I can use Scouting as a ministry.