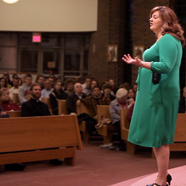 Photo Caption: “If all the pro-lifers in Peoria put actions behind their prayers, the abortion clinic in this area would close,” said Abby Johnson at St. Jude’s Church on Feb. 5.

“This is not your pro-life activity of the year,” Abby Johnson, an abortion clinic worker turned pro-life activist, told an audience of more than 500 Feb. 5.

“I want people to walk away feeling energized and feeling like you can no longer sit at home and pray, you’ve got to get out and make your voices heard,” Johnson told the crowd that nearly filled St. Jude’s Church in Peoria to hear her talk, “Conversion of the Heart.”

Johnson, a former Planned Parenthood clinic director until she witnessed a sonogram-guided abortion in 2009, told her story of working in the abortion clinic and her gradual “disconnect” with reality, and the love and prayers of pro-life people that helped her to leave the industry.

Johnson encouraged her audience to take real steps to promote pro-life principles, whether praying outside the abortion clinic, volunteering at a local pregnancy center, and other pro-life works.

“If all the pro-lifers in Peoria put action behind their prayers, the abortion clinic in this area would close.”

NEW INITIATIVE AND BOOK
Johnson spoke of her new charity initiative — called “And Then There Were None” — to assist abortion clinic workers who want to leave the industry with financial assistance, job placement, counseling and other help. Since the group started in June 2012, said Johnson, 42 workers have left the abortion industry and the group is hearing often from others.

“It seems like every week, women and men are coming to us for help and wanting to leave that industry,” Johnson said. “There hasn’t ever been a place for them to go before, to support them financially and otherwise, when they leave. This is the missing piece.”

Johnson challenged the young people in the audience to stand up and let their voices be heard.

“You are not too young to be involved in this movement,” she said. “You need to have an answer so when your friend comes to you, you have a plan,” such as a trusted person to talk with, your local pregnancy center, and alternatives to abortion.

In a pre-speech interview with The Catholic Post, Johnson — author of “unPlanned” in 2011 — also spoke of her new book to be released later this year by Ignatius Press. Titled “The Walls Are Talking,” it will be a compilation of stories from former abortion clinic workers.

“It’s going to be tough to read, and an intense read, but necessary, so people can hear the truth,” Johnson said. “We have real stories of real people that have witnessed the harm that abortion does, and the scandalous nature of the abortion industry.”