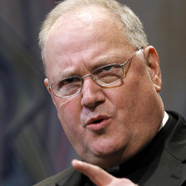 The cardinal, who is president of the U.S. Conference of Catholic Bishops, said the 80-page document released Feb. 1 by HHS concerning the contraceptive mandate in the Affordable Care Act indicates that the administration “seeks to offer a response to serious matters which have been raised throughout the past year.”

He also noted that the bishops “look forward to engaging with the administration, and all branches and levels of government, to continue to address serious issues that remain. Our efforts will require additional, careful study.”

The rules are open for a 60-day comment period and are expected to be finalized this summer.

After evaluating the proposed rules, Cardinal Dolan said in the statement that the bishops continue to stand by the statement on the HHS mandate issued by their Administrative Committee last March and affirmed by the entire body of bishops last June.

In that statement, he said, the bishops expressed concern over the mandate’s “exceedingly narrow” four-part definition of “religious employer,” one that exempted houses of worship, but left “our great ministries of service to our neighbors, namely, the poor, the homeless, the sick, the students in our schools and universities, and others in need” subject to the mandate.

Such a distinction, they said, created a “second class of citizenship within our religious community,” and weakened the federal law’s “healthy tradition of generous respect for religious freedom and diversity.”

The cardinal credited the administration for proposing to drop the first three parts of the four-part test, which he said “might address” some of the bishops concerns but not all.

An HHS spokeswoman said Feb. 1 no nonprofit religious institution — including churches, universities, hospitals and charities — will have to “arrange, contract, pay for or refer for” contraception insurance for employees or students who want it.

Cardinal Dolan faulted the proposed rules for maintaining an “inaccurate distinction among religious ministries,” noting that HHS “offers what it calls an ‘accommodation,’ rather than accepting the fact that these ministries are integral to our church and worthy of the same exemption as our Catholic churches.”

He also said the proposed rules seem to “take away something that we had previously — the ability of an exempt employer (such as a diocese) to extend its coverage to the employees of a ministry outside the exemption.”

The cardinal also noted that the government would require all employees of “accommodated” ministries in religious institutions to have access to contraception coverage, noting that they “may not opt out, nor even opt out for their children.”

According to HHS, even in the case of self-insured religious entities — which includes many dioceses and colleges — employees or insured students who want contraceptive coverage will be able to arrange it through outside insurance companies, at no cost to themselves and without financial or even administrative support of the faith-based institution.

This lack of clarity, he said, provides “the possibility that ministries may yet be forced to fund and facilitate such morally illicit activities” which the bishops would like to see changed in the final rule.

The cardinal also expressed concern that the HHS mandate “creates still a third class, those with no conscience protection at all” such as “employers sponsoring and subsidizing the coverage, insurers writing it, and beneficiaries paying individual premiums for it.”

He said the proposed rule confirms that HHS “has no intention to provide any exemption or accommodation at all” to this group.

The new proposed rules specify that no exemption will be given to “for-profit, secular employers.”

Cardinal Dolan noted that during the past year, the bishops have been assured by the administration that they will “not have to refer, pay for, or negotiate for the mandated coverage” and they “remain eager for the administration to fulfill that pledge.”

“We will affirm any genuine progress that is made, and we will redouble our efforts to overcome obstacles or setbacks,” he said.

He also noted that the bishops take seriously the invitation to submit concerns during the comments period and said they will “do so in the hope that an acceptable solution can be found that respects the consciences of all.”

“At the same time, we will continue to stand united with brother bishops, religious institutions, and individual citizens who seek redress in the courts for as long as this is necessary,” he added.

To date, 44 lawsuits have been filed against the HHS’s contraceptive mandate, 15 by for-profit businesses and 29 by nonprofits groups such as Christian hospitals, universities and charities.

According to the website of the Becket Fund for Religious Liberty, which represents Catholic and other religious institutions in a number of the lawsuits, 14 for-profit plaintiffs that have obtained rulings touching on the merits of their claims against the mandate and 11 have secured injunctive relief against it.

In developments on some of the other lawsuits, a federal judge Jan. 22 dismissed a lawsuit filed by the Diocese of Erie, Pa., calling it premature, because the HHS rules for the contraceptive coverage have not been finalized. But he dismissed the case “without prejudice,” which means the diocese can bring the case back to court.

In December, a U.S. District Court judge ruled that the lawsuit mandate filed by the Archdiocese of New York and two other Catholic entities can move forward. Catholic dioceses and other plaintiffs whose cases have been dismissed are appealing those decisions.