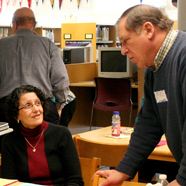 Photo Caption: Father Michael Schaab takes a question from Alejandra Seufferheld from St. Mary’s Parish in Champaign during the seminar on Jan. 26.

CHAMPAIGN — There may be an RCIA team at your parish, but the responsibility for sharing the Catholic faith with those who are seeking the Easter sacraments of baptism, confirmation and Eucharist isn’t up to team members alone, according to Father Michael Schaab.

“It is the work of the whole baptized community,” he reminded those who filled the library at The High School of Saint Thomas More for a seminar on the Rite of Christian Initiation of Adults last Saturday. Sponsored by the diocesan Office of Catechetics, the seminar was hosted by Jackie Scott, regional director of religious education for the Champaign and Danville vicariates.

Noting that the RCIA process was restored during the Second Vatican Council, which was convened 50 years ago, Father Schaab opened the seminar with the prayer that was used before every session of the council. The pastor at St. Pius X Parish in Rock Island, he was director of religious education for the Diocese of Peoria when the provisional English translation of the Rite of Christian Initiation of Adults was still being used.

It was approved by National Conference of Catholic Bishops in 1986, confirmed by a decree from the Vatican’s Congregation for Divine Worship in 1987, and mandated for use in the United States on Sept. 1, 1988.

CHANGE OF HEART
The RCIA is based on the catechumenate model that was used in the early church. In those days people who wished to become Christian lived, worked and prayed with a small Christian community.

Father Schaab said this “apprenticeship” model is the basis for initiation ministry today, where people learn what it means to be Catholic by journeying alongside those who can show them how to do it. While knowing about the faith is important, the real concern must be a change of heart.

“Wherever you see the Spirit break through you have to facilitate that,” Father Schaab said. “Catechesis must be focused on the individual, helping them reflect on their lives and understand what the Holy Spirit is doing in their lives, and then responding to that movement.”

While the RCIA process is carried out over the course of an academic year in many places, it is designed to take as long as each individual needs. One year will be enough for some, but others may require more time to discern what God is calling them to, he said.

Their preparation includes being sent forth from Mass to be nourished by the Word of God they have just heard proclaimed. He acknowledged that this is often misunderstood in parish communities.

Lent is considered a time of purification and enlightenment as those who will be baptized or received in the full communion of the Catholic Church at Easter make their final preparation to celebrate the sacraments. These are the people who will come to St. Mary’s Cathedral in Peoria on Feb. 17 and 24 to be recognized by Bishop Daniel R. Jenky, CSC. (See the related story.)

The community of faith plays a vital role after Easter as well, as these “neophytes” begin to live the sacraments they have celebrated, he said.

Not everyone is a teacher and may not be able to take that role in working with those in the RCIA process, Father Schaab said, but they might be able to lead discussions, help with a church tour or even bake a pie.

“As we grow in the RCIA, we have to realize it’s not just us,” he explained. “We have to bring more people into it.”