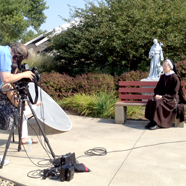 Photo Caption: Sister Judith Ann Duvall, OSF, is interviewed on the grounds of the East Peoria motherhouse of The Sisters of the Third Order of St. Francis for the documentary “Divine Prescription.”

While it might be fun, the Super Bowl this Sunday night won’t cure what ails you. If you want to know what will, tune in to a new documentary that airs before the big game and features Sister Judith Ann Duvall, OSF, who chairs OSF Healthcare System in Peoria.

“Divine Prescription: Stories of Faith, Health and Community” will be shown at noon on Sunday, Feb. 3, on WHOI-TV Channel 19 in the Peoria-Bloomington area. It will air on Sunday, Feb. 17, at 2 p.m. on WICD-TV Channel 15 in the Champaign area, and at 5 a.m. on WTVO-TV Channel 17 in Rockford.

The film was broadcast on Jan. 20 in the Quad Cities.

There are eight segments in the interfaith documentary, which was created, written and produced by Debra Gonsher Vinik of Diva Communications of New York. The segment on Sister Judith Ann, who is also major superior of The Sisters of Third Order of St. Francis, runs right after the introduction.

Dankoff said the documentary does a good job of presenting Sister Judith Ann’s passion for health care ministry and strongly communicates the mission of the East Peoria-based religious community to serve each person with “the greatest care and love.”

FIRST CAME PRAYER
There was some hesitation on the part of Sister Judith Ann to do the segment, however.

When Gonsher was researching faith-based health care online she came across an article from the Peoria Journal Star that featured Sister Judith Ann and The Sisters of the Third Order of St. Francis. Dankoff said she got a call last April, but Sister Judith Ann didn’t agree right away.

“It’s not her style to be out there actively seeking this,” Dankoff told The Catholic Post. “She spent some time in prayer to discern if this was the right thing to do. I think the turning point for her was that this would be shining light on the ministry. She decided it was a great way to tell our story.”

Diva Communications sent a crew to central Illinois in August and filmed not just at OSF Saint Francis, but at the OSF Sisters Community Health Care Center, the Sisters’ East Peoria motherhouse and the Spalding Pastoral Center. Also interviewed for the segment were Msgr. Mark Merdian, episcopal vicar for health care of the Diocese of Peoria; Cynthia Traver, director of the community clinic; and Nathan Carr, cytogenetic technician in the lab at OSF Saint Francis, and his wife, Ryanne.
Before filming Sister Judith Ann, Gonsher agreed to give her some discussion points to consider.

“She’s old school. She writes her own notes,” Dankoff said of Sister Judith Ann. “She likes to be prepared and that gave her some time to think about it.”

Because of her long experience as a television anchor and producer before coming to OSF Saint Francis five years ago, Dankoff was able to serve as a coordinating producer before and during the film crew’s visit.

“I think everyone involved had fun with it. The producers captured the spirit of OSF HealthCare,” she said. “I hope others walk away with that.”
Dankoff encouraged people to keep watching after Sister Judith Ann’s segment, saying the whole documentary was thought out and planned very well.

“It gives a good perspective of how good we have it in Peoria and some of the struggles other parts of the country face,” she said.