Of Jim and Jordan, kindred spirits 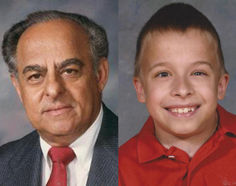 Jim Maloof and Jordan Schmidt had a lot in common for being 93 and 15 years old, respectively.

Most obvious is their common fight against childhood cancer. Jim, the former Peoria mayor, is a hero in the St. Jude Children’s Research Hospital community and spent decades raising money and awareness. His story is captured in his 2010 memoir, “Go Help the Children and God Help You,” titled after the last words his dying mother spoke to him.

Jordan, a sophomore at Alleman High School in Rock Island, battled cancer throughout his life. His story is written on the hearts of all who met the inspirational little big man who was embraced by the Quad Cities community and especially the Alleman and Seton Catholic School families.

Jim and Jordan died days apart in January. Jim’s funeral was at a packed St. Mary’s Cathedral in Peoria. Jordan’s was at a filled gymnasium at Alleman High School.

Read about one and you could well be reading about the other. “He spent much of his time giving back to his community by volunteering his heart and his time to numerous charities and organizations.” From Jim’s obituary? No, Jordan’s.

“He was basically so friendly, the kind of guy anyone would like to meet, because he had such an exuberant, positive personality.” From Jordan’s funeral homily? No, Jim’s. “His optimistic outlook on life was contagious.” That must be about Jim. No, it was told of Jordan.

While Jim was the face of St. Jude Children’s Research Hospital for many, Jordan was spokesperson for Tudi’s Tribe, a nonprofit organization helping children with cancer.

Both had unfaltering faith in God. In his long life, Jim met and befriended hundreds of childhood cancer patients. We’re not sure if he ever met Jordan. But we hope the paths of these two beloved souls — on earth so similar — will cross in heaven.

These two kindred spirits will have a lot to talk about. And those of us still earthbound have a lot to learn from both of them. — Thomas J. Dermody