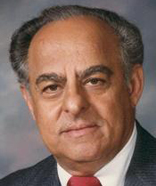 Photo Caption: Jim Maloof, former mayor of Peoria and a key figure in the establishment of St. Jude Children’s Research Hospital in Memphis and its Peoria affiliate, died Jan. 19.

Three-term Peoria mayor and St. Jude Children’s Research Hospital pioneer Jim Maloof was remembered at his funeral Mass Jan. 26 at St. Mary’s Cathedral for his “singing heart,” philosophy of service, and decades of leadership in the fight against childhood cancer.

“St. Francis of Assisi once said that Christian love necessarily has to do with the least, the little, and the last,” said Bishop Daniel R. Jenky, CSC, principal celebrant and homilist. “St. Jude’s Children’s Hospital, and its medical affiliate right here in Peoria, owe an enormous debt to Jim Maloof’s tireless efforts on behalf of those little ones.”

Among those attending the funeral Mass and speaking after Communion was U.S. Secretary of Transportation Ray LaHood, a Peoria native who called Maloof “the Danny Thomas of Peoria in so many ways.” Maloof worked with the entertainer to establish St. Jude’s Children’s Research Hospital in Memphis, Tenn., was instrumental in bringing an affiliate to Peoria, and served as chairman of its board for decades.

The new St. Jude clinic at Children’s Hospital of Illinois at OSF Saint Francis Medical Center in Peoria is named for Maloof and his late wife, Trudy.

Like Thomas, Maloof enjoyed singing. He sang at hundreds of area weddings and funerals, was a member of the cathedral choir for 22 years, and was a fixture for decades at the community’s annual Christmas Sing. In his homily, Bishop Jenky recalled Maloof’s large “singing heart.”

While Maloof, a graduate of Spalding Institute who later founded a real estate company, is known for creatively helping to raise millions of dollars for cancer research, his legacy also includes the personal touch he brought to sick children and their families through personal visits and phone calls. LaHood said it was “almost like he was their parent, grandparent, or uncle.”

“Our children are really our treasures,” said LaHood. “Jim knew that more than anyone else.”

To view the homily of Bishop Daniel R. Jenky, CSC, at the funeral Mass for Jim Maloof, click on the link found at Bishop Jenky’s blog, scroll down slightly to find funeral information and links.