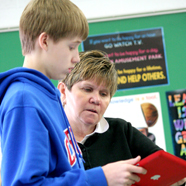 LINCOLN — After 39 years of teaching at Carroll Catholic School, Anne Stoltzenburg is preparing to retire. There’s no chance she’ll be forgotten however, because her fingerprints are all over the school she loves so much.

They’re in the classrooms where she was a student.

They’re in the gym where she coached girls basketball for many years and on the state championship trophy the team brought home in 2000.

Most importantly, they’re on the hearts and minds of the students to whom she taught math and religion for four decades. One of them, David Welch, now sits in the principal’s office.

“She was then and always has been and still is today a demanding teacher,” said Welch, who is in his second year as administrator at Carroll Catholic. “She expects a lot of her students and is certainly willing to offer the help to go along with that high expectation.”

And they live up to those expectations, he said.

“We hear from the high school quite frequently that the students who come in from Carroll are prepared for math. I would give a lot of the credit to her,” Welch told The Catholic Post.

“I really challenge them,” Stoltzenburg acknowledged, “but we have really good students for that reason, too. In a day and age when there are those who are ‘dumbing down’ I’m not. I think we see a lot of that these days.”

She’s also demanding of herself, especially when it comes to learning new technology and how it can help her students learn.

“I said the other day to Mr. Welch if only I could be starting over. All this technology! I cannot believe what a difference it makes,” Stoltzenburg said.

Thanks to a gift from the Elks, which was arranged by one of the Carroll Catholic parents, her algebra students are using iPads this year and they love it, according to the longtime teacher.

“That’s the world they’re going to live in once I’m gone,” she explained. “I would foresee that maybe within 10 years there won’t be textbooks. I think that’s a little sad, although I’m not a textbook teacher. . . . I can see it coming.”

A SECOND HOME
When Stoltzenburg was growing up in Lincoln there were two Catholic schools — St. Patrick’s and St. Mary’s. She was in sixth grade when they combined to form Carroll Catholic School.

She knew early on that she wanted to be a teacher and went to Illinois State University to get her degree. She graduated in 1973 with a major in comprehensive math and returned to Carroll Catholic as a teacher. In addition to teaching junior high math and religion, Stoltzenburg teaches art.

“It’s a big load, but I’ve enjoyed it,” she said. “I love teaching, I really do. I love the kids. It makes you want to get up in the morning.”

For her school has never been work, but a second home. She will miss that “home” and the students, but said she hopes to continue as a substitute teacher and volunteer as needed.

There are also seven grandchildren she’s looking forward to picking up from school and taking to out lunch now and then with her husband, Gary. A longtime educator and coach, he retired last year.

“There’s nothing like grandkids; nothing like it in the world,” Stoltzenburg said. “It’s probably why I’ll enjoy retirement.”

A firm believer in Catholic schools, she notes that religion is not taught, it’s caught.

“I tell the kids that if you look at me and see a coach that’s happy and likes teaching it’s because of religion,” Stoltzenburg said. “If you have faith and a great value system, great things happen and a lot of great things have happened to me.”