Claims surgical abortions have ended at clinic in Bettendorf 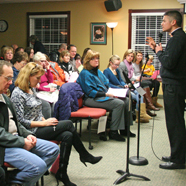 Photo Caption: Father Anthony Co of Rock Island explains the Luminous Mysteries of the rosary on Jan. 22 before leading prayer at a Candlelight Vigil hosted by the Women’s Choice Center in Bettendorf, Iowa.

BETTENDORF, Iowa — Reports that Planned Parenthood of the Heartland is no longer offering surgical abortions at its Bettendorf clinic lent an air of quiet hope to the annual Candlelight Vigil at the neighboring Women’s Choice Center on Jan. 22.

It was one of several success stories shared during the evening, which included prayer and inspirational music. Before the program began, Father Anthony Co, administrator of St. Patrick Parish in Andalusia and chaplain at Alleman High School in Rock Island, led participants in praying the rosary.

The candlelight procession to the Planned Parenthood clinic and vigil were not held due to the dangerous wind chills. Vicky Tyler, director of the Women’s Choice Center, said people were welcome to go and offer prayers on their own and a few did just that.

“ANSWER TO PRAYER”
Jeanne Wonio, respect life coordinator for the Diocese of Davenport and a regular prayer presence on the sidewalk outside the clinic, said the end to surgical abortions at Planned Parenthood in Bettendorf was “an answer to prayer.”

While praying at the clinic in December, they were told by an employee of Planned Parenthood that a restructuring was coming. He later told them that surgical abortions would no longer be offered.

“Webcam abortions” or “medication abortions” are still available up to 9 weeks at the Bettendorf clinic, however.

With a webcam abortion, a doctor in another location takes the patient’s medical history via the webcam on a computer and then pushes a button to dispense RU486. This synthetic hormone cuts off the circulatory system to the baby, Tyler explained.

Two pills are taken before the woman leaves Planned Parenthood and one more pill is taken on the third day.

“They will labor and birth that baby at home with no medical supervision. That’s the danger of it,” she said.

“This is done in Iowa every single day. That’s why those prayers are so necessary and why we need to keep praying,” Tyler said.

She also asked for prayers to help the Women’s Choice Center staff and volunteers handle the marked increase in calls from women seeking an abortion.

“It is very difficult when you get someone on the phone who wants an abortion to talk deep with her about what’s going on in her life and why that abortion is the only option she’s looking at,” Tyler said. “Some of those calls go very well and some of them are very short.”

SUCCESS STORIES
One of the Women’s Choice Center success stories was very active and made his voice heard when his mother was sharing her story.

While holding her son Rob, Sara Mainey said she discovered she was pregnant during a routine medical examination during her junior year at St. Ambrose University in Davenport. Petrified, “I just wanted to make this go away and not have anyone find out.”

She didn’t want to disappoint her family or have her friends think she was stupid and irresponsible. Alone and scared, she went to the Women’s Choice Center to see how far along she was in her pregnancy.

“During the ultrasound the baby put his foot right up against my belly and I fell in love with him,” Mainey said. “I thought about this little person growing inside me and how much potential and impact it could have on our world if we just gave it chance.”

Now little Rob is “my best friend,” she said. “I’m glad I made the choice I did.”