At March for Life, crowds show endurance, passion to continue 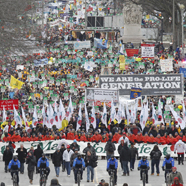 WASHINGTON (CNS) — The tens of thousands of participants at the annual March for Life in Washington Jan. 25 demonstrated just how determined they are not only by showing up in such large numbers on a bitter cold day but by continuing a 40-year tradition of protesting the U.S. Supreme Court’s decision legalizing abortion.

“Forty years ago, people thought opposition to the pro-life movement would eventually disappear,” Boston Cardinal Sean P. O’Malley told the crowd assembled on the National Mall for a rally prior to the march along Constitution Avenue to the front of the U.S. Supreme Court.

He noted that Nellie Gray, founder of the annual march who died last year, “was not going to allow that to happen” nor was the pro-life movement.

“The march grows stronger every year,” said the cardinal, chairman of the U.S. Conference of Catholic Bishops Committee on Pro-Life Activities.

Many speakers praised the resiliency of the crowd, braving a cloudy 20-degree day and standing on snow dusted ground, but they also spoke of the pro-life movement getting re-energized by young people who are becoming the movement’s new torchbearers.

Hundreds of high school and college groups were scattered in the rally crowd, their members texting, taking pictures and creatively protesting by wearing pro-life stickers on their faces and carrying placards in the backs of their jackets.

Their placards did not have jarring images or messages but predominantly took a gentler tone such as: “Abolish Abortion Courageously” or “I am the pro-life generation.”

Jeanne Monahan, new president of the March for Life Education & Defense Fund, is 40 — just as old as the movement protesting the 1973 Supreme Court decision.

Monahan praised Gray for her long dedication to the cause and several speakers also credited her for getting the pro-life movement on its feet with the first march and leading each one until her death. During the rally, a video tribute to her was shown on the giant Jumbotron.

This year’s rally did not include speeches by dozens of politicians. Nine legislators were announced and only a handful spoke.

U.S. Rep. Chris Smith, R-N.J., co-chairman of the House Pro-Life Caucus, told the crowd: “Know this, the pro-life movement is comprised of noble, caring, smart and selfless people. It is an extraordinarily powerful, non-violent, faith-filled human rights struggle that is growing in public support, intensity, commitment and hope.”

Another new aspect at this year’s rally was more use of social media technology, with speakers prior to the rally’s start urging participants to tweet about the rally and follow March for Life on Facebook.

One tweet read to the crowd, which drew a lot of cheers, was from Pope Benedict XVI, which said: “I join all those marching for life from afar, and pray that political leaders will protect the unborn and promote a culture of life.”

Rueben Verastigui, youth activist, had a message for the crowd’s youths.

“You can’t just sit around waiting for change to happen have to get up and make it happen.” He told them to be involved in pro-life work in their schools and that even if they feel they are alone they should remember this experience. “Look around, we are not alone. We are not the future of the pro-life movement; we are the pro-life movement.”

But that message could apply to any age.

Mary Salmon, who has been coming to the march for the past 15 years, said she is energized by the march to continue her work in crisis pregnancy centers.

Salmon, a parishioner from St. Andrew’s Parish in Clifton, Va., said the pro-life movement cannot just keep responding to opposition they face but need to take the lead.

“We have to do something more,” she said.