Eight at St. Augustine Manor surrender their lives to Mary 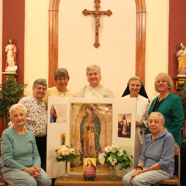 “Retirement community” is probably the first thing that comes to mind when someone mentions St. Augustine Manor in Peoria, but manager Jeri Myers prefers to think of it a house of prayer.

Eight residents quietly demonstrated just how true that was recently by consecrating themselves to the Blessed Virgin Mary after a process of reflection and prayer based on “33 Days to Morning Glory.” Father Michael E. Gaitley, MIC, wrote the book as a “do-it-yourself retreat” in preparation for Marian consecration, which was promoted by St. Louis de Montfort.

Joining the residents from St. Augustine on their journey were six people from the Peoria area who read the reflections on their own. They all made their consecration to Jesus through Mary on Dec. 12, the Feast of Our Lady of Guadalupe.

“This is the Year of Faith designated by the Holy Father. I think all of us want to increase our faith in Jesus, Mary and Joseph and the Blessed Trinity and I thought this would be a good way to do it,” said Sinsinawa Dominican Sister Marya Dugard, who suggested that her fellow residents take a look at Father Gaitley’s book. The Peoria native has lived at St. Augustine for about 11 years.

“The fact that it was a do-it-yourself retreat appealed to me because anybody could do it in their home, in their apartment — even those who are very busy and working could join in,” she told The Catholic Post. “St. Louis de Montfort said [Marian consecration] was the easiest and most sure way of becoming holy, of becoming saints, and attaining salvation.”

Myers not only encouraged them to proceed but joined the group, and Pat Snell quickly found herself cast in the role of leader.

While St. Louis de Montfort’s book, “True Devotion to Mary,” called for 33 days of preparation, the format wasn’t always easy to follow, Father Gaitley writes in the introduction to “33 Days to Morning Glory.” He breaks the process into four weeks of reflection based on how four “giants of Marian consecration” lived it out: St. Louis de Montfort, St. Maximilian Kolbe, Blessed Mother Teresa of Calcutta and Blessed Pope John Paul II.

“It just flows,” Snell said. “It’s so easy to read. Each day is so meaningful.”

EACH ONE “TESTED”
During the process, the group at St. Augustine prayed the rosary with the community each day and then gathered around a table in the library to read the day’s reflection. They also shared how the previous day’s reading had influenced them.

“I kind of did the consecration on my own. I read through the book, but I wasn’t good at pondering each day. I was just reading each day and not really interiorizing it,” Snell said, explaining that her experience with the group at St. Augustine helped her go much deeper.

She added that almost everyone who was preparing for Marian consecration went through a period of testing.

“They were being drawn away from it, wondering if this was the right thing to do for all different reasons,” she told The Post. “But they all stuck with it. I think doing it as a group had something to do with it.”

Myers said she stopped reading “33 Days to Morning Glory” for several days because of her concern that nothing come before Jesus, “and I felt like I was putting Mary before Jesus.”

Feeling a loss of hope, she picked up the book again and started reading about Mother Teresa and Pope John Paul II.

“Suddenly it was as if it was cloudy and the clouds lifted and the sun was shining on me,” Myers said. “I felt such relief and hope and joy — such joy — that I knew something didn’t want me to do this and it wasn’t coming from God and I was going to do this.”

“THE MOTHER I ALWAYS WANTED”
Each of them found that surrendering themselves to Mary and allowing her to use their merits in the way that was most needed has brought comfort and peace.

“After I started reading the book I got the idea that this is the mother that I’ve always wanted — the perfect mother who will take care of me,” said Dorothy Bohan, a Peoria native who has lived at St. Augustine since 2003.

“She was always there,” Bohan added. “I can look back over my life and see where she has been taking care of me all the time.”

“I find that I ‘fly’ — like in the Memorare — to the rosary when waking and ending my day,” said Bonnie Huss, who has been the night attendant at St. Augustine for seven years. “I find that encloses my day with her blessing.”

She said she has also learned that she is not “cheating” the Trinity by going to Mary because “they work as a team for the glory of God. That was very important to me.”

“You can trust our Blessed Mother,” Snell learned again. “I know it was her hand — the Holy Spirit through her — that was guiding me through this whole process. I was thinking of things I normally wouldn’t think of. It just kind of flowed through her.”

The Marian consecration is supposed to take place on a Marian feast day and Sister Marya is certain God had a hand in choosing the Feast of Our Lady of Guadalupe for the group from St. Augustine.

“We have a great concern for pro-life issues and Our Lady of Guadalupe has promised that she will aid us in stopping abortion through this title for her,” she explained.

Sister Marya consecrated herself to Mary 50 years ago and renewed her consecration on Dec. 12. She said she has fallen short many times, “but it’s a way of life that’s so important today. We need a mother to help us through, don’t we?”

The residents at St. Augustine who completed “33 Days to Morning Glory” would be happy to help others who are interested in going through the process and consecrating themselves to Jesus through Mary. For more information, contact Myers at (309) 674-7069.

The book is available at area bookstores or go to AllHeartsAfire.org.