Clinton parish brings Nativity to life with ‘best pageant ever’ 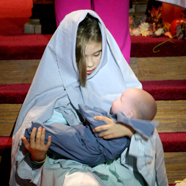 Photo Caption: Jayden Holthaus portrays Imogene Herdman, who was selected to play Mary in “The Best Christmas Pageant Ever,” a family Advent activity at St. John the Baptist Parish in Clinton.

CLINTON — Perhaps there wasn’t quite a cast of thousands, but a production of “The Best Christmas Pageant Ever” included all of the religious education students and their parents at St. John the Baptist Parish here.

Those who didn’t have a role in the production provided the enthusiastic audience for the play-within-a-play, which was the parish’s family Advent activity.

Even members of the Clinton Fire Department took part and Father James Henning, OFM Conv., pastor, was written in. He had to bow out, however, to attend the Mass for the Conferral of Ecclesiastical Honors at St. Mary’s Cathedral in Peoria. Stepping in as the tale’s pastor was Danny Moore.

St. John’s Altar and Rosary Society served refreshments in the parish hall when the applause subsided and all the pictures had been taken.

“It started out as making Advent wreaths and grew. Sometimes the wreath looked pretty good,” quipped director Sara Jenkins, who has taught religious education for six years and directs the children’s choir.

“The children have learned so much — they don’t know it yet, but they have,” she told those gathered in the parish hall for the first act of the play, which was written by Barbara Robinson and adapted for use at St. John the Baptist.

“The Best Christmas Pageant Ever” tells the story of the Herdmans, a group of rowdy kids who don’t know much about the Nativity but end up with the lead roles in the annual program at church. What they discover about the true meaning of Christmas becomes a lesson for everyone around them.

Jenkins worked with the cast for an hour each Sunday night for about six weeks. That wasn’t enough time for the 40 children and 20 adults to go completely “off book” but everyone still had a lot of fun, she said.

“We tried to focus on the process and not worry about some of it,” according to Jenkins. “It’s a very sweet story. The story is timeless.”