A year after change, fewer ”bumps’ with new Mass texts 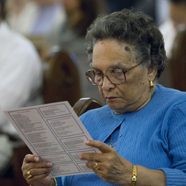 Photo Caption: woman looks over a guide highlighting the new changes in wording for Mass. The new English translation of the Roman Missal has been in use for a little more than a year.

Msgr. Stanley Deptula is the first to admit that the words of the new English translation of the Roman missal still give him pause from time to time.

“It would have been a false hope to think that one year later we would have it all perfectly memorized and never stumble, but perfectly celebrate with the new words,” said Msgr. Deptula, director of the diocesan Office of Divine Worship. “Sometimes even the stumbling provides an opportunity to say, ‘Oops! I do need to pick up the card. I do need to be more attentive. That even a year later I do have to be really conscious of what I’m doing at Mass.'”

He added, with a chuckle, that “only God is perfect and the only perfect liturgy is in heaven.”

The First Sunday of Advent marked one full year of using the new texts. This translation — the third translation of the Roman Missal since the Second Vatican Council — was announced in 2000 by Pope John Paul II. He asked that the missal be retranslated around the world.

The third typical edition was published in Latin in 2002. It took nearly seven years to translate it into English and receive Vatican approval.
Many feared that the faithful would have great difficulty in adjusting to the new words of familiar prayers but that has not been the case in the Diocese of Peoria, according to Msgr. Deptula.

“Sure, there were little bumps here and there,” he told The Catholic Post. “Even once in awhile I found myself saying, ‘Oops! Wrong word,’ at Mass. But in general, from my own experience, from what I hear from priests of the diocese, from the people of the diocese, it’s gone extraordinarily well.”

He added that his hope that the new translation would be an “excuse” for Catholics to renew their love of the Mass and for the truth that those words begin to express has been realized.

The Year of Faith dovetails nicely with that, Msgr. Deptula said, in that it gives us an excuse to pick up the Catechism of the Catholic Church again, revisit Scripture, go to confession and “share the faith with our brothers and sisters who have fallen away or who have never heard about Jesus.”

LANGUAGE INSPIRES, HUMBLES
Msgr. Deptula said the new responses don’t seem to be giving people as much grief as they did at the start.

Problems most often come up during the preface dialogue when the celebrant says, “Let us give thanks to the Lord our God” and the people respond, “It is right and just.” There are still times when people will combine the old and new for “It is right and just to give him thanks and praise.”

The prayer before Communion is another area that needs a bit more time, he said.

Father Robert Lampitt, parochial vicar at St. Matthew’s Parish and chaplain for The High School of Saint Thomas More, both in Champaign, appreciates the new language.

“As a priest praying these new prayers, they are very rich and it helps me to pray the Mass more devoutly,” he told The Post. “Sometimes I wish I could stop and say, ‘Did you just hear that?'”

Msgr. Gregory Ketcham, director and head chaplain at St. John’s Catholic Newman Center at the University of Illinois, said the vivid images in the new translation are “great for personal prayer and reflection.” The students have responded to that as well.

“It’s the beauty of the language we’re using,” he explained. “It’s leading us into a sense of beauty and God is the true, the good and the beautiful.”
What has been most difficult for the students?

“They want to know why we haven’t been doing this for the last 40 years,” Msgr. Ketcham said. “Why did we wait for 40 years if it’s a better translation of the Latin?”

Father Jeffrey Stirniman, pastor of St. Louis Parish in Princeton, said he likes the substance of the eucharistic prayers and the prayers after Communion, but said the number of clauses in the new texts provide a challenge from time to time.

That has also been a concern for Father R. Michael Schaab, pastor of St. Pius X Parish in Rock Island.

“It’s not easy to memorize because it doesn’t flow,” he said. “I think it’s a difficult translation to accomplish what it is supposed to be achieving, which is uniting God’s people in worship of God.” That is especially evident as the liturgy approaches Communion and people have to concentrate on what they are saying rather than what is happening.

Msgr. Deptula said most parishes have used “Mass of Wisdom” by Steve Janco, which has given the Diocese of Peoria a common musical language for liturgies at St. Mary’s Cathedral in Peoria and parish confirmations. Bishop Daniel R. Jenky, CSC, has asked that parishes continue to make people comfortable with that Mass setting in the next year, even as they start to explore other Mass settings.