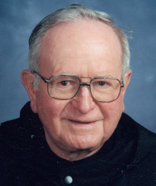 Father Kevin, a monk and priest of St. Bede Abbey, died on Sunday morning, Nov. 25, 2012 at St. Joseph’s Nursing Home in Lacon after a long struggle with Parkinson’s disease. He was 86.

His body was returned to St. Bede Abbey Church on Tuesday, Nov. 27, for a wake service and prayer vigil. Abbot Philip Davey, OSB, presided at the funeral Mass. Burial followed in the abbey cemetery.

Born in Monee on Jan. 3, 1926 to John E. and Lucinda Woeltje Gorman, Father Kevin was baptized as Dale Francis Gorman. After six years at a local country school and the completion of 7th and 8th grades in a single year at Our Lady Academy in Manteno, he attended St. Bede Academy and then two years at St. Bede College.

In 1944 he entered the monastic community of St. Bede Abbey, making his novitiate at St. John’s Abbey in Collegeville, Minn., and professing vows on June 14, 1945. He completed his college studies in philosophy and mathematics at St. Benedict’s College in Atchison, Kan., followed by four years of theology studies at St. Bede.

Father Kevin was ordained to the priesthood on May 13, 1951 at St. Mary’s Cathedral in Peoria.

He then entered an agriculture program at the University of Illinois in Champaign, where he earned both a bachelor and master’s degrees in agricultural economy. For the next decade he taught agriculture at St. Bede College, which had become a junior college after World War II. In 1962, Father Kevin earned a second master’s degree in biology at the University of Notre Dame, and then served as instructor in biology at St. Bede Academy for the next 20 years.

Father Kevin was known to many through his long-standing connection with the student athletic program at St. Bede Academy. He served as athletic director from 1958 to 1984.

From 1984 to 1994, Father Kevin was pastor of St. Joseph’s Parish in Peru and presided over the redecoration of the church and the construction of the “Halle” which serves as the parish hall and the gym for Peru Catholic School.

In 1994 he became pastor of Holy Trinity Parish, Cherry, and St. Patrick’s Parish, Arlington, where he served until his retirement in 2008.

In 2011, he observed the 60th anniversary of his ordination at St. Joseph’s Nursing Home in Lacon, where he had become a patient in early 2009.

In addition to the Benedictine monastic community, he is survived by his sister-in-law, Mary Gorman, of Monee, and her family.