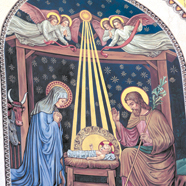 Photo Caption: A Live Nativity scene will be offered in the Monroe Street parking lot of the Spalding Pastoral Center one hour before and one hour after the Santa Claus Parade through downtown Peoria.

The thousands of spectators at Peoria’s downtown Santa Claus Parade on the Friday morning after Thanksgiving are invited to come early or stay late and experience a Live Nativity scene at the Spalding Pastoral Center.

The Catholic Post and Peoria Catholic Radio WPMJ are co-sponsoring the Live Nativity on the parking lot of the pastoral center along the 400 block of Monroe Street, near the start of the parade route.

In addition to seeing persons in costume portraying Joseph, Mary, the Baby Jesus, shepherds, and an angel, visitors can interact with live animals including a miniature donkey, a sheep, a calf, and a goat. A choir will also sing Christmas carols.

While there is no charge to attend the Live Nativity, those attending are encouraged to bring disposable diapers, baby food, or layette items for contribution to Catholic Charities’ new Baby Pantry or the Christ Child Society.

“In this Year of Faith, why not start a new family tradition by taking your children or grandchildren to experience the Live Nativity in addition to the parade,” said Tom Dermody, editor of The Catholic Post.

He explained that planners realize the Nov. 23 date precedes even Advent, but that the opportunity for gentle evangelization at the start of the route of the popular parade — the Santa Claus Parade is in its 125th year and draws participants from a wide area — is already being received as a wonderful idea. Children will receive candy canes with a note explaining that “Jesus is the reason” for the season.

The Live Nativity begins at 9:15 a.m. and will continue until the parade begins one hour later at 10:15 a.m. It will return for another hour at the conclusion of the parade.