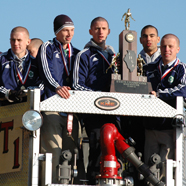 Photo Caption: Members of the Peoria Notre Dame soccer team carried their state championship trophy through the city aboard a fire truck on Nov. 8. The team was cheered during stops at area Catholic grade schools.

Peoria Notre Dame High School clamed the boys Class 2A state soccer championship with a 3-0 win over Urbana. It was the fourth state title — and third in five years — for the Irish.

Senior Danny Aeschliman scored what proved to the game winner early in the contest, and Grant Inskeep added two late goals to seal the title.

The soccer team celebrated the championship with a ride through Peoria aboard a fire truck on Thursday, with stops at several Catholic grade schools where they were met by cheering students. The pep rally also celebrated Peoria Notre Dame’s football team, which plays in the state Class 4A quarterfinals this Saturday evening.

Coached by Mike Bare, the Irish completed a 22-2-2 season and is ranked 15th in the nation by the National Soccer Coaches Assocation of America.

Meanwhile, an all-school assembly was scheduled Nov. 9 in Champaign to celebrate the state Class 1A boys cross country title won by The High School of Saint Thomas More. Seven Sabres ran personal records in leading the team to the championship.

It was the school’s third state title in its short 11-year history.

Nick Hess finished in third place overall, while Jacob Helfrich placed 21st.
Last year, the Sabers finished fourth, one spot from the trophy. They entered the state finals ranked first in their class, and proved worthy of their ranking by besting second place Elmwood-Brimfield 82 to 157.