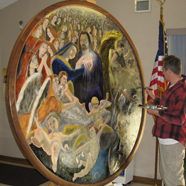 Photo Caption: Artist Michael Acerra puts finishing touches on “Reception of the Unwanted,” a painting commissioned by Knox County Right to Life. It will be hosted each month by a different area church.

GALESBURG — As the cause of defending the sanctity of human life continues in central Illinois, a new painting by a local artist is offering church-goers in Knox County a heavenly perspective on the issue of abortion.

“Reception of the Unwanted” is the theme of a nearly seven-foot, circular painting by Michael Acerra. It was unveiled Oct. 27 at the Pro-Life Pastors’ Dinner hosted by Corpus Christi Parish here.

“It’s inspiring, amazing,” said Pat Conklin, pro-life coordinator of Corpus Christi Parish in describing the painting that was commissioned by Knox County Right to Life to travel from church to church. “It touches your heart.”

The painting depicts a baby — representative of the millions who have been killed through abortion — being welcomed into the arms of Jesus and Mary, as a host of human and angelic beings surrounds them.

But to one side of that that gentle scene, the painting also depicts angels engaging in spiritual battle, “mirroring the fight for righteousness here on earth,” according to the artist, a classically trained painter who is a member of Corpus Christi Parish.

The idea for the project came from Lisa Perry, an art teacher at Costa Catholic Academy in Galesburg. To make it happen, Knox County Right to Life turned to Acerra, a Barrington native who graduated from Knox College in 1989 and whose murals can be seen in public and private establishments throughout Illinois.

“I cannot claim credit for this painting,” Acerra told The Catholic Post. Over the course of a year, he said, “it seemed to paint itself.”

He credited the work to “many good Christian souls of all denominational stripes in this life-loving community who have prayed to the Holy Spirit to give me guidance and confidence.” Acerra showed sketches to representative groups as the work progressed and valued their input.

The painting is in the style of Michelangelo’s “Doni Tondo,” a depiction of the Holy Family also done in a round frame. Acerra declined payment for the time he spent on “Reception of the Unwanted,” asking Knox County Right to Life to cover only the costs of the high quality materials that went into it.

“It’s my family’s gift to the people of Knox County Right to Life,” said Acerra, who is married and has two sons.

Inspiring his creative process was Acerra’s belief that “God made us, loves us, and that we are special and unique and stamped with God’s soul and divinity.” By including other innocents killed throughout history, including by Herod, in the hosts welcoming the child, Acerra shows that abortion “is the same crime and will exact the same reaction in heaven.”

In November, “Reception of the Unwanted” is on display at Bethel Baptist Church, 1196 N. Academy St. in Galesburg. In December, it will move to Immaculate Heart of Mary Parish, while in January it will be displayed at Corpus Christi Parish.

Conklin said the painting will inspire the Knox County pro-life community for years to come. She pointed out that 20 churches were represented at the Oct. 27 pastors’ dinner, which featured a presentation on China’s one-child policy by Steven Mosher.

“We have already had two members of Bethel who have studied art tell us what an amazing work this is,” wrote the Rev. Lee Johnson of Bethel Baptist Church in a column penned just four days after the unveiling. “Even if you are not a trained art critic you will be moved by the different aspects that are present in the painting, so look closely.”

Because the painting will travel to many different churches, Acerra said he designed it as ecumenical but made sure it also embraced Catholic traditions. In one raised hand, for example, an angel holds a Eucharistic host.

EDITOR’S NOTE: Inquiries regarding hosting the painting can be made to Conklin via email at conklinr@grics.net or by telephone at (309) 343-2852.