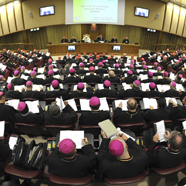 Photo Caption: Pope Benedict XVI leads a closing session of the Synod of Bishops on the new evangelization at the Vatican Oct. 27.

VATICAN CITY (CNS) — Members of the Synod of Bishops recommended the Vatican establish a commission to monitor religious freedom, develop guidelines for training evangelizers and ensure there is a church in every diocese where confession is always available.

At the end of the three-week world Synod of Bishops on new evangelization, members of the gathering approved 58 propositions to give to the pope; although synod rules say the proposals are secret, Pope Benedict authorized their publication Oct. 27.

The propositions were designed as recommendations for the pope to use in a post-synodal apostolic exhortation. Many of the propositions described current challenges and opportunities that the church faces in sharing the Gospel, strengthening the faith and reaching out to lapsed Catholics.

The propositions said, “The proclamation of the good news in different contexts of the world — marked by the process of globalization and secularism — places different challenges before the church: at times in outright religious persecution, at other times in a widespread indifference, interference, restriction or harassment.”

During the synod discussions, bishops in different parts of the world described different relationships with Muslim neighbors, ranging from situations in which Christian minorities experience serious discrimination to cases of Catholics and Muslims working together to address social problems.

The synod propositions encouraged Catholics “to persevere and to intensify their relations with Muslims” in accordance with the teaching of the Second Vatican Council.

— Developing a “pastoral plan of initial proclamation” that would outline steps to help ensure that once people hear the Gospel, they are led to conversion and faith and are educated in church teaching. It also should describe the “qualities and guidelines for the formation of Catholic evangelizers today.”

— Asking that every diocese establish a parish or shrine dedicated “in a permanent way” to the administration of the sacrament of penance, ensuring “priests are always present, allowing God’s mercy to be experienced by all the faithful.”

“The sacrament of penance and reconciliation is the privileged place to receive God’s mercy and forgiveness,” it is a place of healing and strength, and it is the sacrament that can bring people back into full communion with the church, the synod members said.

As they did in the synod hall, synod members used several propositions to emphasize the importance of the family as the place where life and love are first given, where people are introduced to the faith and where they learn to live according to Gospel values.

The church’s new evangelization efforts must help strengthen families and must try “to address significant pastoral problems around marriage: the case of divorced and remarried (Catholics), the situation of their children, the fate of abandoned spouses, the couples who live together without marriage and the trend in society to redefine marriage,” synod members said.

Recognizing an increase in secularism around the world, synod members said that in many ways Christians are living “in a situation similar to that of the first Christians,” who were small minorities in cultures indifferent or even hostile to Christianity.

Still, synod members said, “the world is God’s creation and manifests his love.” Even if Christians are just a little flock, they are called to “bear witness to the Gospel message of salvation” and “to be salt and light of a new world.”

The propositions emphasized that while the primary task of the church is to bring people to a personal relationship with Jesus Christ, a relationship lived and nourished in the church, part of reaching out to others and witnessing to the Gospel involves serving the poor and sick, working for justice and protecting the environment.

Synod members praised the members of religious orders, who have been on the frontlines of evangelization for centuries, as well as the activities of new movements and communities. But they stressed the importance of all members of a diocese coordinating their work with the local bishop, and they insisted on the key role of parishes as the places where most Catholics learn about and practice their faith.

The propositions included a suggestion that parish priests or other designated parish staff visit families in the parish as part of their outreach.

The propositions described the liturgy as “the primary and most powerful expression of the new evangelization” and a manifestation of God’s love for humanity.

“Evangelization in the church calls for a liturgy that lifts the hearts of men and women to God,” synod members said.

During synod discussions, several bishops spoke about the importance of the church learning the particular language and culture of social media and new technology to share the Gospel with people who increasingly spend their time online.

In the propositions, they said Catholics should be trained “to transmit faithfully the content of the faith and of Christian morality” through the media, but they insisted that no technical talent or online presence could take the place of “the testimony of life” lived in accordance with the Gospel.

Synod members described young Catholics not primarily as objects of evangelization, but as evangelizers, especially of their peers.

“As the media greatly influence the physical, emotional, mental and spiritual well-being of the youth,” they said, “the church through catechesis and youth ministry strives to enable and equip them to discern between good and evil, to choose Gospel values over worldly values, and to form firm faith convictions.”