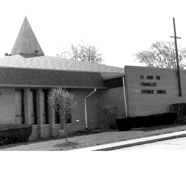 Photo Caption: The present St. John the Evangelist Church and parish hall in Walnut were built in 1976.

WALNUT — For 100 years, the faith of Catholics in this Bureau County community has been nurtured at St. John the Evangelist Church, 204 N. Main St. Next Sunday, Nov. 4, parishioners will celebrate that century of faith with a Mass and catered dinner.

Father Thomas Shaw, pastor, will be the principal celebrant of the 3 p.m. liturgy. Former pastors have been invited to return and concelebrate with him.

Dinner will follow in the parish hall, where scrapbooks and other memorabilia will be on display. Not only are there photos of the original church, which was dedicated by Bishop Edmund M. Dunne in 1912, but also of the priests who have served the parish, Communion and confirmation classes, and other significant people and events in the life of the parish.

LOOKING BACK, AHEAD
“When the parish was established this was largely a German Protestant area. We’ve been a very small Catholic presence in it,” Father Shaw told The Catholic Post, “but we’ve been able not only to survive but thrive here.”

The first church was named in honor of John Naughtin, whose wife donated the land. It cost $6,000 and was the spiritual home to 20 families.

A mission of Immaculate Conception in nearby Ohio for 52 years, St. John’s was elevated to parish status in 1964 by Bishop John B. Franz. The first resident pastor was Father Richard J. Means, who lived in a mobile home until the rectory was built in 1968.

A building fund for the present church was begun under Father Dale Maloy. Construction of the new $200,000 church and parish hall began on May 25, 1976, during the pastorate of Father J. Richard Fagan and was ready by Christmas. It was dedicated on March 27, 1977, by Bishop Edward W. O’Rourke.

The stained glass window that graces the entryway had been the front window of the old church, providing a sense of continuity between the two structures.

Since Father Shaw was named pastor in 2011, the parish has undertaken projects to repair a major water leak that flooded the basement during heavy rains and replace the church’s 35-year-old sound system, which was really showing its age, according to Father Shaw.

“I had been told by a parishioner that if people knew what the money was for and what the need was they would come up with the money,” he said, noting that they raised $14,000 for both projects. “It was paid for the day it was completed.”

A substantial bequest from another parishioner has enabled the community to give the church a much-needed “facelift” to bring it up to code for handicapped accessibility and replace the sidewalks, among other things.

“The people have really stepped up. I’m proud of this congregation and what they have shown me since I got here,” Father Shaw said. “We have a future. They will be and want to be a part of it.”