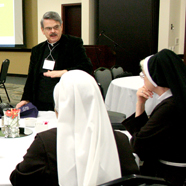 Saying it was an interesting time to be engaged in Catholic health care, Bishop Daniel R. Jenky, CSC, urged participants at the annual Diocesan Health Care Day to stand together and to stand with the bishops.

“I can’t imagine America, in the mosaic of health care, not having present what you folks do. It’s irreplaceable,” the bishop told the health care professionals, ethicists and lawyers gathered at the Spalding Pastoral Center in Peoria on Oct. 16. The conference was sponsored by the Diocesan Health Care Committee with assistance from the Office of Family Life.

Referring to the mandate from the U.S. Department of Health and Human Services that would require most religious employers to provide health insurance that covers abortion, sterilization procedures and contraception, Bishop Jenky emphasized that Catholic health care “is not a business — it’s an apostolate.”

“You aren’t in this to make a ton of money. We’re here to serve Jesus Christ. You see Christ in the poor, the sick, the people you comfort in the emergency room,” he said. “We know why we do this ministry and therefore we know what we must do.”

Members of the religious communities that sponsor Catholic hospitals and lay professionals must stand together and not give “the enemy” — the devil — an opportunity to divide them, he said.

“If ever there was a time the Catholic Church needs to be united it’s now,” Bishop Jenky told them. “Be in communication, talking to one another, letting one another know what you’re up to in this matter.”

He also encouraged them to pray as they never have before.

“We can’t be private Catholics,” the bishop said. “We can’t belong to Jesus Christ at home and not belong to him in public. . . . Let’s pray, let’s work, let’s stick together.”

HISTORICAL ROOTS
Msgr. Mark Merdian, episcopal vicar for health care and president of Peoria Notre Dame High School, was the host and facilitator for the conference.

Giving participants more background on the political climate that bred the HHS mandate and opportunities to consider strategies was Jesuit Father William P. Grogan, system director of ethics for Presence Health and vicar for health care for the Archdiocese of Chicago.

Father Grogan suggested that government’s seeming disregard for the place of religious principles in health care is the fruit of what began in Europe during the Enlightenment and the Laicite Movement in France as the 19th century closed and 20th century began. Reason and logic became the standard by which everything was measured, leaving little room for emotions or faith.

Religion became marginalized and privatized and in some countries, such as Germany and France, religious institutions were seized by the government. The Congregation of Holy Cross, Bishop’s Jenky’s religious community, lost five colleges in France, for example.

Father Grogan said this philosophy eventually found its way into elite universities in the United States, where it has been embraced: “Why is my behavior being constrained by some religious institution with money I’ve already paid as a taxpayer?”

“The HHS mandate is not about contraception,” he said. “That’s just the occasion. There’s a much bigger doorway through which they want us to walk.”

SOMETHING TO WATCH
Father Grogan offered the health care professionals five strategies for engaging the culture, saying that right now “Christ and culture” seem to be in paradox. The culture can still be transformed, but it requires that believers act with integrity, be good witnesses and keep pressing the point.

“What is our primary goal? It is the universal call to holiness,” he said. “God did not call us to be 400 years ago but here and now. What do we do with what we’ve got?”

Father Grogan gave the health care providers two case studies to consider in light of these strategies and “intersecting contexts” and then visited each table to continue the discussion.

Geoly addressed the finer points of law involved in the HHS mandate and the questions that arise from what lawmakers chose to include and exclude. In essence, he said, the government is usurping the right of the church to define itself.

For example, one of the requirements to be exempted from the mandate is that the organization’s primary purpose be the inculcation of religious values and the government is going to decide if it does or it doesn’t.

Another requirement is that the organization primarily employs persons who share its religious values, but Geoly said the Catholic Church is based on evangelization.

The greatest infringement of all may be the requirement that the organization primarily serves those who share its religious tenets, he said.
In the end, the mandate “converts our activity, which we do for religious reasons, into a government activity,” Geoly said.

Father Grogan said he didn’t think the issue would go away with a new administration because the perception of progress and call for universal health care are already part of the climate. Geoly said even if there were a change in administration and the mandate is repealed it could always be reinstated.

“It’s something to watch between November and next August” when the HHS mandate will take affect for everyone, including religious employers, Geoly said.