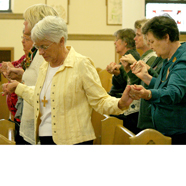 Photo Caption: Among those joining hands in prayer at the Diocesan Council of Catholic Women convention were Jean Causemaker, Kim Kane, and Mary Frimml.

ATKINSON — Humility is the rock foundation on which holiness is built and charity is the steeple, according to Father Joseph Mary Brown, CSJ, the keynote speaker at the biennial convention of the Peoria Diocesan Council of Catholic Women.

“There are two fundamental points for growing in holiness. They are humility and charity,” he told the 60 women who gathered in the parish hall of St. Anthony’s Church here on Oct. 13.

“She’s the greatest of the saints, she’s the queen of saints, and yet she was the smallest,” he explained. “She was the most humble.”

In addition to reflecting on the spiritual life, those who attended the convention had an opportunity to consider life around the state and the nation through remarks on faithful citizenship and freedom of religion from Mary Massingale, director of communications for the Catholic Conference of Illinois.

They also heard from Christine Schumann of the Archdiocese of Chicago, who recently succeeded Joan Weber of the Diocese of Peoria as the director of the Chicago Province of the National Council of Catholic Women.

At Mass and later during the DCCW business meeting, Msgr. Dale Wellman encouraged the women to give prayerful consideration to the candidates they would support in the coming elections and asked them “to let your faith and conscience by your guide.”

He expressed his gratitude and that of Bishop Daniel R. Jenky, CSC, for their service to their parishes and communities.

“As many bishops and people have said, if it wasn’t for you ladies we certainly wouldn’t get anything done,” said Msgr. Wellman, longtime spiritual moderator for the DCCW and pastor of Sacred Heart Parish in Moline.

“Your organizations and your work carry on the ministries of the church at a very personal level, being with people one on one,” he told them. “I thank you for your help and your ministry in the Diocese of Peoria.

“USE YOUR VOICES”
Quoting the saints and near-saints of the church, including St. Teresa of Avila, St. Therese of Lisieux, St. Augustine, Blessed Pope John XXIII and Venerable Archbishop Fulton J. Sheen, Father Joseph Mary — prior of the Community of St. John in Princeville — also used Scripture and humor to offer spiritual insights.

St. Teresa of Avila, for example, said humility is truth, he noted.

“When we’re humble we’re in the truth — of who we are and of God is,” Father Joseph Mary explained. “If humility is truth, pride is a lie. Every time we’re proud we’re living a lie. We think we’re something we’re not.”
Jesus demonstrated charity when he washed the feet of the disciples at the Last Supper and then laid down his life for them, according to Father Joseph Mary.

Quoting Archbishop Sheen, he added, “Love that is not sacrificial risks becoming trite, banal and commonplace; it doesn’t go very far. Whereas love that’s sacrificial goes on to the end, as Christ did.”

Charity, therefore, means to love as Jesus loves — unconditionally, he said. “Our vocation as wives, mothers, Christians is to be love in the heart of the church.”

Schumann said that love is needed to address the NCCW’s priority of being advocates for the homeless. That includes mentoring single women and mothers so they can stand on their own two feet and escape homelessness, she said.

Schumann added that Archbishop William Lori of Baltimore, chair of the Ad Hoc Committee on Religious Liberty for the U.S. Conference of Catholic Bishops, had asked the NCCW and its members for their continued support for religious liberty issues.

“I encourage all of you to use your voices,” she said. “Let people know what the Catholic faith stands for.”

Massingale also encouraged them to use their voices during the November elections, which include decisions about every member of the U.S. House of Representatives and all 177 lawmakers in Illinois.

“In terms of religious freedom, the main issue is the Health and Human Services mandate,” she said. “Right now the battleground before the election is the campaigns. Since we cannot technically endorse candidates it’s up to the voters to make their voices heard.”

The Catholic Conference of Illinois partnered with the Catholic Health Association for public relations efforts during last summer’s “Fortnight for Freedom, including 30-second radio spots, banner ads on newspaper websites across the state and op-ed columns in the newspapers. The conference also launched the Illinois Catholic Advocacy Network (I-CAN) to keep people informed about pending legislation.

Another resource is a series of four bulletin inserts distributed this fall by the Catholic bishops of Illinois. (Excerpts from the bulletin inserts can be found on page 29, with the full text provided on the conference’s website, ilcatholic.org.)

“The inserts are intended to help people reflect on what their faith means to them and what it’s asking you to do,” Massingale said.