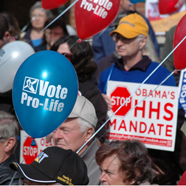 Photo Caption: Many participants at the Oct. 20 “Stand Up For Religious Freedom Rally” in downtown Peoria made their feelings known with signs as well as their presence.

Bishop Daniel R. Jenky, CSC, drew cheers at the third and final “Stand Up for Religious Freedom Rally” during this election year on Saturday by affirming that the destruction of innocent human life is “an area where we may not and will not compromise.”

Speaking before hundreds along Peoria’s riverfront, the bishop continued to outline how the Obama administration’s Health and Human Services mandate threatens religious liberty.

In addition to asking religious groups to “fund things we believe are immoral” — including abortion-causing drugs, sterilization, and contraception — the mandate also “tries to define what is religious ministry,” said the bishop.

He used a mission statement quote prominently displayed at many Catholic schools including St. Philomena’s in Peoria to drive home his point that the Catholic mission extends well beyond church walls.

“Be it known to all who enter here,” reads the statement, “that Christ is the reason for this school. He is the unseen but ever present teacher in its classes. He is the model and the inspiration of its students.”

Bishop Jenky said that belief “defines everything we endeavor to do to serve the Lord” in hospitals, Catholic Charities, etc., and that “no government has the authority to tell us what we’re doing is not in service of Jesus Christ.”

The bishop made the “assault on religious freedom” the focus of a letter to be read at all Catholic Masses on the weekend before Election Day. It is reprinted at right. In addition, at the Red Mass celebrated Sunday at St. Mary’s Cathedral, he reminded politicians, judges, lawyers and “every Christian believer” that discipleship “means being willing to stand up for our Faith, and even ready to fight for what is right.”

“WHERE DOES IT END?”
Others at Saturday’s ecumenical rally echoed Bishop Jenky’s sentiments.

“Thankfully, our loyalty to God and country have seldom been in conflict,” said Dr. Ritch Boerckel, senior pastor of Bethany Baptist Church in Peoria. Protesting a government action “is not what we long for,” he added, but in this case is “necessary because the mandate requires us to do that which God prohibits” — the harm of children in the womb, pregnant women, and society.

“To force us to purchase something against our religious beliefs is totally wrong. Where does it end?” asked Schilling. He said the government has never won when it “overreached” in attacking First Amendment rights “and they will not win this time.”

Schock predicted there will be new mandates and more surprises as the Affordable Care Act takes effect.

“My colleagues, the majority of them, voted for a law they had not read, and as a result we’re still finding out what’s in it,” said Schock. He said “elections have consequences” and challenged citizens to “pledge your activism to ensure these liberties continue to be protected for future generations.”

State Sen. Darin LaHood said he was proud to stand with Bishop Jenky.
“It hasn’t been easy for him, but he’s standing for the right principles and the right issues and we’re going to do everything we can to make the changes we need to make?.and stand for religious freedom.”

The Peoria rally, sponsored by Central Illinois Right to Life, was one of nearly 100 such events around the U.S. on Oct. 20. Mark Lang introduced the speakers and Rachel West Kramer led the crowd in patriotic and spiritual songs.