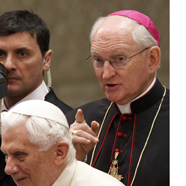 Photo Caption: U.S. Archbishop James Harvey, prefect of the papal household, is one of six new cardinals announced by Pope Benedict XVI on Oct. 24. He is a native of Milwaukee.

The pope said the consistory to create the new cardinals, who come from six countries, would take place Nov. 24, the feast of Christ the King.

It will be the smallest group of cardinals created since the 1977 consistory when Pope Benedict, the then-Archbishop Joseph Ratzinger, received his red hat from Pope Paul VI along with three other churchmen.

Pope Benedict made the announcement at the end of his weekly general audience, which was attended by about 20,000 pilgrims. As is usual, Cardinal-designate Harvey was seated next to the pope during the audience. While he did not visibly react when his name was announced, the new cardinal-designate smiled and had a brief moment with the pope before returning to his normal duties of helping lead important guests up to the pope.

The pope said he was naming Cardinal-designate Harvey the new archpriest of Rome’s Basilica of St. Paul Outside the Walls.

Telling the crowd that he had the “great joy” of announcing new cardinals, Pope Benedict said cardinals have “the task of helping the successor of Peter in his ministry” of strengthening people’s faith and promoting the unity of the church.

The pope asked Catholics to pray that the new cardinals would “always love Christ and his church with courage and dedication.”

Of the six soon-to-be cardinals, only Cardinal-designates Harvey and Salazar were not members of the world Synod of Bishops on the new evangelization, which was meeting at the Vatican when the pope made his announcement.

As the pope climbed into the popemobile at the end of the audience, Vatican security officers and Vatican ushers approached Cardinal-designate Harvey and shook his hand in congratulations.

Pope Paul VI limited the number of cardinal-electors to 120. After the Nov. 1 birthday of Nigerian Cardinal Francis Arinze and the Nov. 23 birthday of Italian Cardinal Renato Martino, there will be six vacancies.

Cardinal-designate Harvey has worked at the Vatican for 30 years. Born in Milwaukee Oct. 20, 1949, he was ordained to the priesthood in 1975 by Pope Paul.

He entered the Vatican’s diplomatic corps and spent two years as a Vatican diplomat in the Dominican Republic before being transferred to the Vatican Secretariat of State in 1982. In 1997, he was named assessor of the secretariat, a rank similar to that of an undersecretary at a Vatican congregation, and in 1998 Pope John Paul II named him prefect of the Papal Household, the office responsible for organizing papal audiences, including those with heads of state.

When Cardinal-designate Harvey becomes a cardinal, the United States will have 19 cardinals, 11 of whom will be under 80 and thus eligible to vote in a conclave to elect a pope.