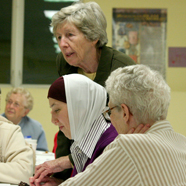 MOLINE — When Pope Benedict XVI recently visited Lebanon, he called on Catholics to dialogue with their Orthodox, Jewish and Muslim neighbors. He could not have known that 65 people would be doing just that in Moline last Monday night and had been committed to the peace-building process since 2006.

“I know that dialoguing here in our small, little community may not solve definitively all of the problems of the world, but I sincerely believe it plants those little seeds of understanding and respect that will blossom and beautify our little corner of the world,” Dr. Talia Alvi said as she welcomed people to the Seventh Annual Muslim-Jewish-Christian Women’s Dialogue. This year’s gathering was hosted by Masjid-al-Ihsan, the Islamic Center of the Quad Cities.

Acknowledging that coming to the Moline mosque might have taken some of the participants outside their comfort zone, she commended them for their willingness to share their faith and learn about other religions.

“Sharing leads to learning and it is that increased knowledge that sets the basis for deep understanding and mutual respect, and also to lose the fear of the unknown, of the other,” Alvi explained. “While we respect our differences, this helps us to come closer in acceptance and friendship for each other.”

The theme for the 2012 dialogue, which continues Monday, Oct. 1, is “Under the Tent of Abraham.” The biblical patriarch is considered a common ancestor for the Jewish, Christian and Muslim peoples.

“I sometimes wonder if we were to delve deeper into our common ancestry and try to find those common threads from then to now, wouldn’t that go a long way to resolve a lot of the issues, a lot of the problems that we see in the world today,” Alvi said.

WHO IS GOD FOR YOU?
As a way to enter into conversation, the women (and a few intrepid men) were asked to consider “Who is God to you?” and “How does knowing God make a difference in your life?” Offering brief reflections to get them started were Rabbi Tamar Grimm of the Tri City Jewish Center in Rock Island; Rosemary Schmitt of Sacred Heart Church in Moline; and Sophia Farooqui of the Muslim community in the Quad Cities.

Rabbi Grimm recalled that a great teacher had once said it is only possible to describe God in the negative — God is not this, God is not that.

“Any words that we would try to use to describe God would be insufficient because God is the ultimate. God is the greatest. God is the most wonderful, the infinite. How do you put words to that,” she said, laughing as she admitted that she just had, “but all of them are inaccurate.”

Schmitt said there are many names and images for God in Christian tradition and offered a few attributes that are most meaningful to her at this time in her life. Her list started with “God is love” and included wisdom, beauty, compassion, forgiveness, comforter, healer, mystery and hope.

“No matter how many names or images I could list or that all of us could list together, I would still not have the complete and full understanding of God,” Schmitt said. “Your images of God help to complement and enlarge my image of God.”

Farooqui said Muslims refer to God as Allah, which has no plural or gender. Allah is a combination of two words, “the” and “God” — the almighty creator who is similar to nothing and to whom nothing is comparable.

There are 99 names for Allah in the Quran, she explained, noting that learning them and living according to them are said to lead to paradise.
“As a practicing Muslim we should always think of God before we do anything and how I can approach things in my daily life,” Farooqui said.

NOTHING OFF LIMITS
After the dialogue had ended, Alisa Antonelli of Davenport, a convert to Islam, said she encouraged the people at her table to ask her anything.

“I want people to know what we are really like and not what they see from a small portion (of people) in the media,” Antonelli said, referring to the violence that has erupted over an anti-Islamic film. “That’s a very, very small percentage. That’s not Islam. That’s not us.”

Asana Mohamed also criticized the media, saying that nothing has been shown of the counterdemonstrations for peace.

Breaking down barriers is just one benefit of these kinds of dialogues, according to Rabbi Grimm.