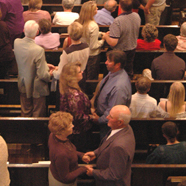 Photo Caption: Golden anniversary couple Ted and Virginia Gilles (foreground) of St. Mary of the Woods Parish in Princeville were among couples renewing their vows at the annual diocesan Anniversary Mass Sept. 16.

Some might say it was chance that brought John Minnaert of Atkinson, then a worker on the County Highway, and Carolyn Wallaert together at a dance in a park in Princeton more than five decades ago.

“I was the only available girl and I danced with all of them,” Carolyn recalled. “He danced the best,” she said of John, “and he’s the one I picked to go out with.”

Fifty years of marriage, five children, and eight grandchildren later, Msgr. James Kruse had another explanation for the Minnaerts’ love story — and those of couples from throughout the Diocese of Peoria who gathered Sept. 16 for the annual diocesan Anniversary Mass.

“God created your marriage,” he told the couples marking their golden and silver wedding anniversaries in 2012. “In faith, we believe it was by God’s divine providence that you met and fell in love. It was not just by some coincidence or fate that you were brought together.”

Msgr. Kruse, vicar general of the Diocese of Peoria, was homilist at the annual celebration during which Bishop Daniel R. Jenky, CSC, led the couples in a renewal of their marriage vows. While the bishop has traditionally given the homily, there were 50 reasons why this year it was Msgr. Kruse.

His parents, Deacon Fred and Gail Kruse of Chillicothe, observed their golden anniversary this year and were seated in the front pew.

REFLECTING GOD’S LOVE, FAITHFULNESS
“God deeply loves marriage and deeply loves the couples with us,” said Msgr. Kruse in a theme he repeated several times in his homily.

The permanent marriage bond reflects God’s faithfulness, he said. And the sacrament of marriage’s call for husband and wife to lay down their lives for one another reflects how Jesus, the groom, “laid down his life completely for his bride, the church.”

God also defined marriage from the start as between a man and a woman, Msgr. Kruse said.

“It is not a human invention,” he said of marriage, “nor simply the whim of politics or the accumulation of the ways of culture. God has loved and created marriage from the beginning.”

In welcoming remarks, Bishop Jenky noted that, as a sacrament, marriage is “an outward sign instituted by Christ that gives grace.”

“The families present today certainly have been graced by the love of these couples, and so has this church,” said Bishop Jenky, who posed with the couples individually for photographs following the Mass. He prayed that God bless and strengthen their unions “so that they may show forth an even more powerful image of the union of Christ with his church.”

The annual Mass is coordinated by the diocesan Office of Family Life. The couples mingled at a reception that followed at the Spalding Pastoral Center.

And they shared their secrets to a lasting relationship.