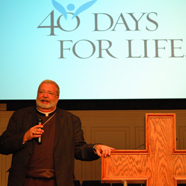 Photo Caption: Bishop Jenky urges those at a kickoff event for “40 Days for Life” in Peoria to believe in the “power of the cross” as they and communities across the U.S. unite in prayer for an end to abortion.

Peaceful vigils at abortion facilities in Peoria, Champaign, and in the Quad Cities as well as 40 days of prayer and fasting began Sept. 26 as part of a nationwide campaign to end abortion. The campaign continues daily through Nov. 4.

Speaking at a kickoff rally at St. Paul’s Baptist Church in Peoria on Sept. 13, Bishop Jenky recalled how just a few decades ago Communism was considered so powerful “nothing could defeat it.” But following years of prayer — including at the end of Catholic Masses for the “conversion of Russia” — the “power of that evil system just collapsed.”

Bishop Jenky urged the more than 100 in attendance not to be discouraged by “40 years of endless pro-abortion propaganda” in the media and entertainment industry..

Touching the church’s cross-shaped podium, Bishop Jenky recalled that “Good Friday was a dark day,” but because Christ is risen “we have nothing to fear in serving him.”

“We will fight no matter what to protect the sacred value of every human being,” said Bishop Jenky. And he repeated his strong stand against the Obama administration’s HHS mandate that requires even religious institutions to provide health care coverage of abortion-inducing drugs, contraceptives, and sterilizations.

“We will not do it,” said Bishop Jenky forcefully. “I cannot, I will not, cooperate with intrinsic evil.”

“A CAMPAIGN THAT WORKS”
Karen Guth, a member of St. Vincent de Paul Parish in Peoria and a coordinator of the Peoria “40 Days for Life,” called it a “campaign that works.” She cited hundreds of babies saved nationwide in past years and abortion centers that have shut down.

In inviting wide participation in the campaign, she asked people to consider the ripple effect of abortion.

“What does abortion do to our city,” she asked. “Do we have a problem with violence in Peoria?” Conservatively estimating there have been about 1,000 abortions performed at Peoria’s facility so far in 2012, Guth asked how that impacts not only the women but “1,000 fathers, 1,000 grandparents, 1,000 friends and family members, and the workers at the facility who had to deal with this 1,000 times.”

She encouraged area churches to take responsibility for entire days of the prayer vigil, and reported great success in that effort this year. “We have to be the hands and feet of Jesus to all we meet there,” she said of the abortion facility at 7405 N. University.

Keynote speaker Rev. Cal Rychener of Northwoods Community Church not only urged support for all pro-life ministries “on the front lines,” but called Christians to personal involvement, including considering adoption. He said churches must be “healing places for those who have had abortions. Such women do not need our condemnation,” he said, but should be offered “truth and grace.”

In Champaign, the vigil has begun at Planned Parenthood of Central Illinois, 302 E. Stoughton. Call Sheila Regan at (773) 203-1343 for more information.

Participants from throughout the Quad Cities are invited to join the prayer vigil now taking place daily on the sidewalk in front of Planned Parenthood, 2751 Tech Drive, Bettendorf, Iowa. To sign up, contact Jeanne Wonio at (309) 355-4188.

More background on the campaign is available at 40DaysforLife.com.