Pope to Middle East Christians: “Sufferings are not in vain” 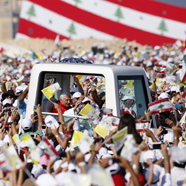 Photo Caption: Pope Benedict XVI arrives in the popemobile to celebrate an outdoor Mass on the Beirut waterfront Sept. 16. The pope was wrapping up his three-day visit to Lebanon.

BEIRUT (CNS) — Pope Benedict XVI acknowledged the suffering of Christians in the Middle East, reassuring them and urging them to promote peace through religiously inspired service to their societies.

“Your sufferings are not in vain,” the pope told a crowd of at least 350,000 at a sweltering outdoor Mass at Beirut’s City Center Waterfront Sept. 16. “Remain ever hopeful because of Christ.”

In his homily, Pope Benedict commented on the day’s reading from the Gospel of St. Mark, in which Jesus foretells his death and resurrection. Jesus is a “Messiah who suffers,” the pope said, “a Messiah who serves, and not some triumphant political savior.”

Speaking in a region riven by sectarian politics, where party loyalties are often determined by religious affiliation, the pope warned that people can invoke Jesus to “advance agendas which are not his, to raise false temporal hopes in his regard.”

Pope Benedict told his listeners, whose travails of war and economic insecurity he had acknowledged repeatedly throughout his visit, that Christianity is essentially a faith of redemptive suffering.

“Following Jesus means taking up one’s cross and following in his footsteps along a difficult path which leads not to earthly power or glory but, if necessary, to self-abandonment, to losing one’s life for Christ and the Gospel in order to save it,” he said.

Yet Pope Benedict also cited another of the day’s Mass readings, the epistle of St. James, to emphasize the spiritual value of “concrete actions” and works, concluding that “service is a fundamental element” of Christian identity.

Addressing a region where Christian-run social services, including schools and health care facilities, are extensively used by the Muslim majority, the pope stressed the importance of “serving the poor, the outcast and the suffering,” and called on Christians to be “servants of peace and reconciliation in the Middle East.”

“This is an essential testimony which Christians must render here, in cooperation with all people of good will,” Pope Benedict said.

During the homily, the only sound was the pope’s voice and its echo from the loudspeakers. Many people leaned over and bowed their heads with eyes closed, so they could concentrate more deeply.

Following the Mass, the pope formally presented patriarchs and bishops of the Middle East with a document of his reflections on the 2010 special Synod of Bishops, which was dedicated to the region’s Christians. In the 90-page document, called an apostolic exhortation, the pope called for religious freedom and warned of the dangers of fundamentalism.

Sheltered from the sun only by white baseball caps and the occasional umbrella, people had already packed the city’s central district by 8 a.m., almost an hour-and-a-half before the pope arrived in the popemobile, which took him to the foot of the altar. In temperatures that rose into the high 80s, the pope celebrated Mass under a canopy while bishops and patriarchs on either side wiped their brows and fanned themselves with programs.

Aside from the complimentary white pope caps, people in the crowd improvised versions of sun protection with torn pieces of corrugated boxes tied around heads and papal and Lebanese flags worn as bandanas.

“We Christians must be united and participate” in the pope’s visit, Srour told Catholic News Service, “otherwise there will be no more Lebanon. It will become like Iraq, and now Syria, with all the Christians leaving.”