Respect Life coordinators told that God’s will to triumph 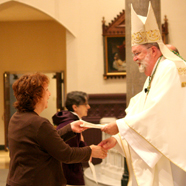 Photo Caption: Colleen Yucas of Immaculate Conception Parish, Ohio, accepts a certificate of appreciation and the gratitude of Bishop Jenky at the annual Mass for respect life coordinators on Aug. 25.

Respect life coordinators from parishes around the Diocese of Peoria heard words of encouragement and thanks when they came together for their annual Mass and meeting last Saturday in Peoria.

“We serve the master of the universe,” Bishop Daniel R. Jenky, CSC, reminded them in his homily at the opening Mass at St. Mary’s Cathedral. “His will is what will finally triumph and his goodness — the fact that he is a loving abba, a father to all his children — is the reason why we can, day after day, year after year, do what God asks.”

Keynote speaker Mailee Smith, staff counsel for Americans United for Life, echoed his words at the workshop that followed at the Spalding Pastoral Center.

“I’m sure all of you working for the unborn and their mothers know that even in the last couple of years the environment has changed, the landscape has changed,” she said. “There’s so much more hostility coming at us in the rhetoric from the opposition. At times I think we can feel kind of isolated in our work. I know that I can.”

Smith emphasized that they were not without hope, however.

“I believe as a Christian that God is the ultimate victor in this fight and we will not lose,” Smith said.

During the day, the 100 respect life coordinators received packets of resource materials for Respect Life Sunday prepared by the U.S. Conference of Catholic Bishops’ Secretariat for Pro-Life Activities. The theme for this year’s observance, which is set for Sunday, Oct. 7, is “Faith Opens Our Eyes to Human Life in All Its Grandeur and Beauty.”

They also heard about upcoming opportunities for prayer and witness, such as Life Chain and Forty Days for Life. After lunch the respect life coordinators met in vicariate groupings to share ideas and make plans for Respect Life Month and the Day of Prayer and Penance for Life on Jan. 22, 2013 — the 40th anniversary of the Supreme Court decisions that legalized abortion.

“LET NOTHING DEFEAT YOU”
Before he commissioned them for another year in their pro-life ministry, Bishop Jenky told the respect life coordinators that there was no one in central Illinois who was prouder of them and what they do than him.

“Why is it that we work so strenuously for the Gospel of Life without getting discouraged? It is because our abba, our Father is the Father of all people, including innocent life in the womb,” Bishop Jenky said. “We should not hold back (but) serve that good God and to protect those brothers and sisters.”

They aren’t alone in their work, he added.

Introducing them to Sister Ana Pia Cordua, SCTJM, the director of Catholic Charities of the Diocese of Peoria, Bishop Jenky urged them to work with her and Father Bill Miller, IC, director of the Diocesan Respect Life Board, to promote the dignity and life of all persons.

As a sign of his support and affection, he presented a certificate to each coordinator and shook their hand.

“How blessed we are to have a shepherd whose voice is clear and strong — a voice for the unborn and their mothers, a voice for the sanctity of marriage and family life, a voice calling for the protection of the freedom of the church in our country that has been so urgently needed,” Father Miller said.

GLIMMERS OF HOPE
Mailee Smith, who grew up in Pekin and is a former volunteer at the Family Resources Center in Peoria, said she has been committed to ending abortion since the fourth grade. While Americans United for Life is based in Washington, D.C., she is able to live in central Illinois with her husband and three small children and work from home much of the time.

Acknowledging that these are tough times for people of faith, Smith said she came to bring them hope that the current attacks on religious liberty would be rebuffed and that things are not as bad as they seem.

Among them is a court case that is ongoing in Illinois right now, Morr-Fitz v Quinn. It addresses an emergency ruling issued in 2005 by then-Gov. Rod Blagojevich to force all pharmacists to provide emergency contraception or contraception in general, regardless of their religious beliefs.

Smith, who was the lead counsel when the case was filed, said the court handed them a “tremendous victory” last year when it found no evidence of anyone who was unable to obtain emergency contraception because of a religious objection. It added that the state had been unable to offer evidence that anyone had trouble finding a willing provider.

The court decided that the rule violated the Illinois Rights of Conscience Act, the Religious Freedom Restoration Act in Illinois and the First Amendment, according to Smith.

She also discussed the mandate by the U.S. Department of Health and Human Services that would require most employers to provide insurance coverage that includes abortion-inducing drugs, as well as contraception and sterilization, calling the limited exception clause “a farce” because the language is so vague.

She thanked them for “standing firm” and continuing the fight.