Newlyweds, both sets of parents share the same wedding date 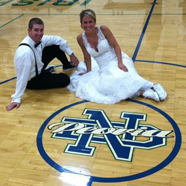 Photo Caption: After they were married at Sacred Heart Church in Peoria on Aug. 11, Rachel and Jared Lucas returned to Peoria notre Dame high School where they started dating in 2004.

Rachel Merriman and Jared Lucas have known each other since junior high and started dating as seniors at Peoria Notre Dame High School in 2004, so it wasn’t a surprise when they got engaged just before Christmas in 2010.

As they planned their celebration, Rachel and Jared decided to share the day with their parents, Bill and Barb Merriman and Tom and Peggy Lucas. Both couples had been married 33 years ago on that exact date.

After the newlyweds exchanged their vows this Aug. 11, the Merrimans and Lucases were called forward to renew theirs.

Rachel said that when they decided to make their special day even more special by involving their parents, it was with the blessing of Father David Richardson, who presided at the Mass at Sacred Heart Church in Peoria.

“We didn’t really tell them for awhile,” she said. “We eventually told our parents, but nobody else at the wedding knew that that was going to happen.”

“Father did such a nice job,” Barb recalled. “He said, ‘Now let’s have the future grandparents come up here.’

“I don’t think there were a lot of dry eyes. There were so many emotions anyway because it was such a beautiful ceremony for them, but we were very tickled,” she told The Catholic Post. “I turned and looked at them and there were tears in their eyes.”

In fact, Father Richardson told Barb that if she didn’t stop crying he would, too.

“We had several people close to our age, husbands and wives, come up and tell us how beautiful it was and they had tears in their eyes,” she said.

“I just feel like our parents shared so much with us throughout the years. They’ve given us everything,” Jared said. “It was something that we wanted to have together, to be able to celebrate together for many years down the road.”

“They’ve shown us . . . how much they love each other. I think it was the best way to thank them, like Jared said, for everything they’ve done for us,” Rachel added.

A STRONG BOND
The Merrimans belong to Sacred Heart, while the Lucases are longtime members of St. Philomena’s Parish in Peoria, where Father Richardson is the pastor. The bride and groom have purchased a house within St. Philomena’s boundaries and are in the process of joining the parish.

“The first time they encountered each other they were in the seventh grade,” Peggy said. “Rachel is a heck of a basketball player. She was wearing Air Jordans and when Jared walked past her he said, ‘I thought you had to be good to have a pair of shoes like that.’ He teased her.”

By the time they were sharing a senior homeroom at Peoria Notre Dame, things had changed.

“They had such a bond. I always knew they would end up together,” Peggy said. “They had a very special relationship. She’s been part of our family forever.”

After graduation the couple went on to Illinois Central College in East Peoria, where Rachel was point guard for the Cougars for two years. When she transferred to Bradley to play basketball and complete her studies to become a teacher, Jared went to Illinois State University in Normal to earn a bachelor’s degree in social work. He has since added a master’s degree in school counseling from Bradley.

Jared is beginning his second year as a counselor at Peoria High School. Rachel serves as a math teacher and coach for the women’s soccer and basketball teams at Richwoods High School.

AN EXTRA BLESSING
Not only are they devoted to making a difference in the lives of the young people with whom they work, but they have a strong faith, Peggy said.

“When they bought their house they never wanted to move in together,” she explained. “They wanted to wait until they got married to be together. You don’t find that every day. They have a very deep-rooted faith.”

“It’s a good experience to share a life with somebody in the eyes of God,” Jared said. “A lot of people can live together and say they’re going to get married and go through a ceremony, but we went through the church and made it official with God. I think that adds a little extra blessing to what we have.”

Bill Merriman said he has always appreciated how respectful Jared and Rachel are of one another.

“He’s been a gentleman ever since I’ve know him,” Bill told The Post. “I trust him and I know he’s always had Rachel’s best interests at heart.”

While the newlyweds took the spiritual aspects of their wedding very seriously, they also made room for some whimsy. The fathers of the bride and groom, as well as all the groomsmen, received black Converse All-Stars and Rachel wore a pair of white sneakers to the reception at Embassy Suites in East Peoria.

As wonderful as the day was, they know the best is yet to come.

“For years on down the road it’s going to add more meaning to it and be more special for us that that’s the day we were married on,” Jared said. “If it hadn’t been for our parents getting married on the day they did 33 years ago, we wouldn’t have been married on that day 33 years later.”