Masses in Cherry, Pekin can be seen around the globe online 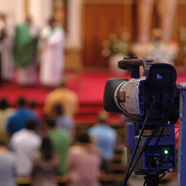 Photo Caption: One of four cameras mounted on the choir loft rail at St. Joseph’s Church in Pekin captures sights and sounds at a recent Mass being “live streamed” on the Internet for viewers near and far.

Catholics have always known that the graces of each Mass extend well beyond their church walls, even bridging heaven and earth.

But for two parishes in the Diocese of Peoria, the Masses celebrated by their faith communities can actually be seen around the world.

“It’s a great thing,” said Father Patrick Fixsen, pastor of Holy Trinity Parish in Cherry, of the recent decision to place a camera in the church so all daily and weekend Masses may be viewed online — either live or recorded — via links on the parish website, cherryholytrinity.org

While the reach is global, the targeted audience at Holy Trinity — as well as at St. Joseph’s Parish in Pekin, which just marked its first year of offering the service at www.stjosephpekin.org
— may be only a few blocks away.

“We have a lot of homebound people watching,” said Dave Fisher, who is the lead volunteer coordinating the technology at the Pekin parish. “The homebound so often no longer feel a part of the church,” added Fisher, who mixes images from four cameras mounted in the choir loft. “This makes them feel that they are.”

UNEXPECTED BENEFITS
Each parish already can cite unexpected benefits of the online Masses, with broadcasts of funerals, weddings, First Communion and graduation Masses being especially appreciated by out-of-town family and friends who can’t attend in person.

Fisher told of one funeral the parish hosted where the deceased had many relatives in Mexico. “The family all got together to watch it online, and felt like they were there,” he told The Catholic Post. “There are lots of stories like that.”

In Cherry, Holy Trinity parishioner Marlene Klug has her own reason for viewing the Mass online.

“We generally attend Saturday afternoon Mass, so it’s fun to watch the ‘replay’ of the Mass and see how we’ve behaved!” she said. Klug and others cited advantages of hearing a repeat of the homily, and she noted “the clarity of the video and audio are impressive.”

The parishes in Pekin and Cherry offer the service through an arrangement with an Ohio-based company called Churchcast, which provides the streaming technology and basic equipment. The company also offers reports of who is viewing, and from where.

“It’s interesting to see how many spots around the world tune into the Mass,” said Fisher, who worked with Msgr. Timothy Nolan, former pastor, and seminarian Jacob Rose to bring the system to Pekin last summer. While 80 percent of the nearly 1,000 monthly online views of the Pekin Masses are local, some are quite distant — including a parishioner’s son who watches from Afghanistan.

“Someone from the United Kingdom is tuning in along with a regular viewer from up in Hebron,” said Jack Rooney, who helped implement the technology in Cherry. Viewers also include parish “alumni,” such as Jane Byczek, originally from Cherry and now living in LaGrange.

“There is something very comforting and relaxing about viewing the Mass from Cherry,” said Byczek. “To view the Mass from where you spent your childhood, received the sacraments, and spent so many wonderful hours with your family and friends is something I really enjoy.”

NEW USES, POSITIVE FEEDBACK
The parishes are continuing to find new uses for the technology.
In Pekin, Fisher — who has professional video experience (though none is required to set-up and operate the system) — immediately makes a DVD of the funeral Mass so that the priests of the parish can hand it to a family member after services at the cemetery.

“We get amazing feedback on funerals,” he said.

In Cherry, Father Fixsen hopes to begin Eucharistic adoration hours during the coming Year of Faith, and the technology can help shut-ins prayerfully take part. Live streaming of guest speakers, musical events, and even the recording of youth education classes are also being considered.

Regarding the online Masses, Father Fixsen pointed out that viewing a liturgy online doesn’t fulfill the Sunday obligation for those otherwise able to attend. Still, he cited evangelization opportunities for inactive Catholics who find them the Masses on the Internet.

While Fisher, a daily Mass attendee, uses three of his own cameras in the system at Pekin and enjoys blending the images using a mixing board in the choir loft, the system is designed to run automatically and hands-free. Panning and zooming can even be done remotely by ChurchCast employees “so the church can focus on what’s important, the service, while we focus on the broadcast,” said Brian Duerring of ChurchCast.

Because the cameras are mounted in the rear of the church, they are not at all obtrusive or a distraction. But Fisher admits his thoughts sometimes wander to just who is viewing.

“We think the bishop’s office watches all the time,” he said with a smile. And he said the parents of Father James Pankiewicz, parochial vicar, often tune in from their home in St. Joseph’s, Mo., to watch their son.

“I often think of Mrs. Pankiewicz when we’re streaming,” he said.