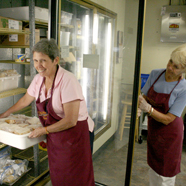 Photo Caption: Bev Tomblin pulls a bin of sandwiches from the failing refrigeration unit at Sophia’s Offerings from Angels Kitchen while Rita Loyd holds the door.

Having a working refrigerator — and a pretty big one at that — isn’t really an option when you’re serving meals to between 400 and 500 people every day.

That’s the dilemma facing Sophia’s Offerings from Angels Kitchen at St. Joseph’s Church in Peoria, and it’s one the staff and volunteers hope the community will help them solve.

Since 2010, the kitchen has housed the sandwich program that started at Sacred Heart Church in downtown Peoria. Manager Claire Crone said they rely on refrigeration for the meat, eggs, drinks, sandwiches, salads, and occasional treats (and holiday hams) that are given to those in need, but the unit that has served the parish for the last 20 years needs to be replaced.

“It was a beer cooler in a former life at a grocery store,” she told The Catholic Post. “It was put together in an odd fashion here. It worked out OK . . . but we worked it hard.”

Not only is the unit a bit too tall for the space — it pushes up the ceiling and had to be sealed so the cold air wouldn’t escape into the attic — but the shelving is loose. “When the volunteers put something on the shelves I’m afraid the whole thing will come down,” Crone said.

She added that after a recent power outage they had a hard time getting the unit to turn on again.

In order to replace it, Sophia’s Offerings from Angels Kitchen has launched the “100 Days of Hunger” campaign, which is seeking 100 people to pledge $100 each over the next 100 days. It began on Aug. 17 and Crone said they have already received “some beautiful, generous donations” toward their $10,000 goal.

Grateful for any contribution, Crone noted that one woman had sent in $22.50.

“Apparently that was all she had,” she said. “That’s a blessing.”

The unit will cost nearly $20,000 and it will take between $2,000 and $6,000 more to remove the old unit, purchase the new one and install it. The George O. Pasquel Company is giving it to them at cost, Crone said.

Any monies received over and above the campaign goal will be used for other sandwich program needs and improvements to the kitchen and hall.
While the campaign will run through Nov. 25 — the weekend before Advent begins — “it would be wonderful if we could get [the new unit] in by the first of November,” Crone said.