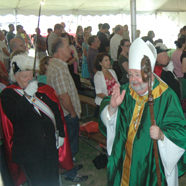 Photo Caption: Bishop Daniel R. Jenky, CSC, blesses the assembly at the conclusion of the Mass he celebrated beneath a tent on the grounds of the Erin Feis Irish festival in downtown Peoria on Aug. 26.

Following is the full text of the homily by Bishop Daniel R. Jenky, CSC, at the Mass celebrated on the festival grounds of the Erin Feis in downtown Peoria on Sunday, Aug. 26. Find a story on the festival Mass here.

In every undertaking, in every contest, there comes a critical moment of testing. Will you fight to win, or just give in?

It might be a business, it might be a farm, where many are failing and simply sink under waves of trouble and bad times. But some entrepreneurs, some farmers, will never surrender and will do whatever is necessary to survive and eventually to flourish.

It might be a marriage where the honeymoon is long over, where serious problems in the relationship have arisen and have not gone away. Many folks today forget their vows, made not only to each other but also made to Almighty God ? vows of fidelity, for better or worse, until death do us part. Some seem unwilling to do the hard work of human change, of personal renewal, of loving even when it hurts!

For just as Christ is one with his Bride, the Church, and freely gave his life for the church, a man and a woman should become one flesh and one spirit, guided by love and deeply committed to one another.

And here in America, if we still want to believe that we live according to our motto ? “In God We Trust” ? we must also be willing to live according to God’s Law. No human government has the authority to change an ordinance of Almighty God which was established from the beginning.

Marriage was established by God between a man and a woman. This Divine Law cannot be made subject to mere human law, dictated by political correctness, by leftist politicians, or by the decadent immorality of Hollywood and its stars.

This is certainly a time of enormous testing in America’s culture wars. And it is not yet clear who will cave in first, or who will finally win.

Certainly there are many moments of testing in any journey of faith. For example, in today’s first reading from the Book of Joshua, all the tribes of Israel are assembled at Shechem, standing in their ranks before the Lord. (Remember that the name Jesus is a shortened form of the name Joshua, like Patty from the name Patrick, or Jimmy from the name James.)

And the name Joshua means “God will save his people” ? a good name for Joshua, and a perfect name for Jesus.

Joshua, who had succeeded Moses as leader and who led Israel in their conquest of the Promised Land, now lays down a decisive challenge: “If it does not please you to serve the Lord, decide today whom you will serve, the gods your fathers served beyond the River, or the gods of the Amorites, in whose country you are now living.”

And the people responded, “Far be it from us to forsake the Lord for the service of other gods. Therefore we also will serve the Lord, for He is our God.”

I think it takes but little spiritual insight to recognize that today as American Catholics we are facing a rather similar testing of our Faith.
What does it really mean to be an Irish Catholic, and to celebrate the great heritage of Celtic Christianity? Is it just about wearing green, drinking Guinness, easting soda bread, dancing jigs and reals, and loudly singing rebellion songs? Remember that in those past horrible years of famine and relentless persecution, the Irish rebellions had a lot do to with a contest of Faith and Ireland’s fierce resistance to the imposition of another faith.

In today’s America, the forces of atheism and radical secularism are becoming every bit as intolerant as the British army once was in closing down our religious institutions, our hospitals, our ministries to the poor, and our Catholic schools.

When today our Faith is tested about the definition of marriage, about the defense of human life, abour right and wrong, about good and evil, about the Mass and the sacraments, about the challenge of unwavering adherence to Catholic teaching and Catholic tradition, will we stand up bravely as did our Irish ancestors, as did Joshua of old, and boldly declare for all to hear: “As for me and my household, we will serve the Lord.”

Now there is nothing new about surrendering, about caving in, about giving in during defining moments of testing.

In today’s Holy Gospel according to John, we learn that many of the Lord’s first disciples abandoned Jesus and returned to their former way of life and no longer accompanied him. Their faith had been tested by one of the Lord’s hard sayings, and many failed the test.

And many argued among themselves: How can this man give us his flesh to eat?”

Then Jesus, without any apology, tested them even further.

“Does this shock you?” he provocatively demanded. “What if you were to see the Son of Man ascending into heaven to where he was before at the very right hand of the Father?”

Just as he had first revealed the sublime doctrine of the Holy Eucharist, so now he clearly reveals that he was God Incarnate, the only begotten Son of the Father.

And again, many failed the test of faith, and turned away from him and left him.

So Jesus turned to his apostles and asked them, “Do you want to leave as well?” And Peter, the rock of the Church and our first pope, answered with faith and deep conviction: “Master, to whom shall we go? You have the words of eternal life. We have come to believe and are convinced that you are the holy one of God.”

The Holy Apostle Peter passed his test of faith, but what about you and me living in this Year of Our Lord 2012?

In just a few moments we will come to Holy Communion. A Eucharistic minister will say, “The Body of Christ,” and we will give our answer, “Amen,” meaning “So it is. I believe.”

At an Erin Feis Mass this answer of faith is rather routine and easy to give, and seems not much of a test for those who call themselves Catholic Christians. And yet that ritual word, “Amen,” is really a dangerous word and a challenging word. It is a pledge of loyalty. It is a serious commitment to witness and to live our Catholic Faith.

It is one think to say “Amen,” but it is quite another thing to live “Amen.”
And if we do not live what we say, we are actually turning away from Jesus and making the most deadly mistake of our lives. We are heading not to eternal life, but to eternal death. Not to eternal salvation, but to eternal damnation.

As we hear in one of the inspired Psalms of David: “How can you recite my commandments and take my covenant on your lips, you who despise my law, and throw my words to the winds?” It is blasphemy and the gravest sacrilege to mock the Living God by pretending to be Catholic and not living as a Catholic.

So in times of testing, like winning athletes, like successful entrepreneurs, like determined farmers, like men and women committed to love in the sacrament of marriage, like Joshua and the tribes of ancient Israel, like Peter and the holy apostles, and like those heroic saints and scholars of Ireland, be we Democrat or Republican or Independent, despite what anyone else in this passing world may say or do or threaten or ridicule, may we and all our households always do whatever is necessary to faithfully serve the Lord.