Catholics in ‘moment of testing,’ says bishop at Irish festival 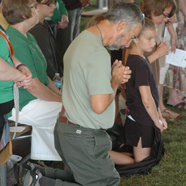 Photo Caption: John Grillot of Washington kneels on the grass the Aug. 26 Mass celebrated by Bishop Daniel R. Jenky, CSC, on the grounds of the Erin Feis festival in Peoria.

Catholics in the United States are at a “defining moment of testing” in which they must live their faith and not “cave in” to cultural and political challenges, Bishop Daniel R. Jenky, CSC, said Sunday.

At the annual Mass celebrated beneath a large tent on the grounds of Peoria’s downtown Erin Feis Irish festival, Bishop Jenky called on Catholics to “stand up bravely” against threats to marriage, human life, Catholic institutions and ministries.

“Be we Democrat or Republican or Independent, despite what anyone else in this passing world may say or do or threaten or ridicule, may we and all our households always do whatever is necessary to faithfully serve our Lord,” said the bishop in his homily.

The full text of the Erin Feis homily can be found online here.

The Mass began as a gentle rain fell, for which Bishop Jenky expressed gratitude in this year of drought. Music was provided by The Kells, an Ohio-based Irish music quartet that would take the stage following the Mass.

TEACHING ON MARRIAGE
Bishop Jenky opened his homily by challenging married couples to do the “hard work” of love, remain faithful to their vows, and “always put the other person first in the equality of true love.”

He said that no human government has the authority to change the definition of marriage, established by God as between a man and a woman.

“This divine law cannot be made subject to mere human law dictated by political correctness, by leftist politicians, or by the decadent immorality of Hollywood and its stars,” said Bishop Jenky.

Recalling Ireland’s fierce resistance to the imposition of another faith, the bishop said the forces of atheism and radical secularism in America today “are becoming every bit as intolerant as the British army once was in closing down our religious institutions, our hospitals, our ministries to the poor, and our Catholic schools.”

Citing examples from Scripture and Irish history of heroes who remained faithful even during times of trial and testing, he challenged Catholics today to “live what we say” and not simply pretend to be Catholic.

Hundreds attended the Mass despite the rain, gaining entry to the festival by donating canned goods for distribution to the needy through the Missionaries of Charity. The Mass was coordinated by the Ancient Order of Hibernians.