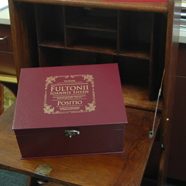 Photo Caption: This desk, on which Venerable Archbishop Fulton J. Sheen studied while in high school, is one of several artifacts on loan to the Sheen Museum in conjunction with the Mass of Thanksgiving on Sept. 9.

As details emerge about the Sept. 9 events in Peoria celebrating Venerable Archbishop Fulton J. Sheen and Pope Benedict XVI’s recent approval of his heroic virtues, the reasons to attend multiply.

“This will be a gathering of some of Sheen’s best friends from around the world,” said Msgr. Stanley Deptula, executive director of the Sheen Foundation.

You may count yourself among them.

While the guest list includes family members of the Catholic media pioneer as well as church officials — including Bishop Daniel R. Jenky, CSC, and his predecessor as Bishop of Peoria, Archbishop John J. Myers of Newark — Msgr. Deptula reiterated that the 10:30 a.m. Mass of Thanksgiving is open to the public.

“We want everyone who can to join us at the Mass,” he told The Catholic Post this week.

“So many have prayed and worked so hard for these 10 years” since the Diocese of Peoria opened Archbishop Sheen’s cause for canonization, he observed.

The morning celebration at St. Mary’s Cathedral will be a “spiritual event,” said Msgr. Deptula. Cathedral doors will open at 8:30 a.m. for a holy hour beginning at 9 a.m., to be followed by recitation of the Mission Rosary promoted by Archbishop Sheen at 10 a.m. The sacrament of reconciliation will also be offered.

“Archbishop Sheen’s secret to holiness was his love of Jesus in the Eucharist,” said Msgr. Deptula. “How could we celebrate him without spending time in front of the Eucharist?”

UNIQUE ASPECTS OF MASS
Bishop Jenky will be principal celebrant of the liturgy, and Msgr. Deptula will be homilist.

“I’ve been working on that homily since the end of June,” said Msgr. Deptula.

On June 28, Pope Benedict XVI advanced Archbishop Sheen’s sainthood cause by raising the native of the Diocese of Peoria to the rank of “venerable.” The Congregation for Saints Causes is now studying documentation of a miracle attributed to Archbishop Sheen’s intervention that might lead to the next step of beatification.

At the conclusion of the Sept. 9 Mass, Bishop Jenky will present to Archbishop Myers and to several Sheen patrons specially printed and packaged copies of the two thick books summarizing documents and evidence gathered on Archbishop Sheen and explaining why his life was one of heroic virtue.

One hundred copies have been printed — the only copies of the two 1,000-page volumes that will ever be printed, according to Msgr. Deptula — and are encased in handcrafted leather boxes. While most of the special editions will go to those whose donations made its printing possible, some will be retained in the diocesan archives.

In addition to Archbishop Myers, church officials expected to be present at the Mass of Thanksgiving include Father Andrew Apostoli, CFR, vice postulator of the cause; Father Andrew Small, OMI, national director of the Pontifical Mission Society; and Msgr. Richard Soseman, coordinator of international outreach for the Archbishop Sheen Foundation. Also concelebrating will be Msgr. Steven P. Rohlfs, former vicar general of the Diocese of Peoria who is now vice president and rector of Mount St. Mary’s Seminary in Emmitsburg, Md.

While there will be reserved seating in the cathedral for Sheen family and guests, many pews will be available to the public and there is certainly no charge to attend Mass, said Msgr. Deptula. If the crowd swells beyond the cathedral’s seating capacity, portable speakers will be set up outside.

NEW ARTIFACTS IN MUSEUM
The diocesan celebration also includes a reservations-only brunch that follows the Mass at the Spalding Pastoral Center. While there was a reservations deadline of Aug. 15, a limited number of walk-in tickets will be available. More information on the brunch and other Sheen-related events is available online at Celebrate Sheen.

Msgr. Deptula also announced that several new artifacts have been loaned to the Fulton J. Sheen Museum at the pastoral center just in time for the diocesan celebration.

Visitors will be able to see the desk that Archbishop Sheen used at home during his high school years (on loan from Dr. Sean Fulton Cleary and Dr. Thomas Cleary); view a miter that he wore in liturgical celebrations (on loan from the University of Chicago Calvert House; the large crucifix that was prominent on the set of his television program; and, for a limited time, the red cape he wore during his broadcasts. The cape, on loan from Archbishop Peter Sartain of Seattle, will be displayed for a limited time, starting near the Sept. 9 Mass date. It will be encased in glass for viewing.

The Sept. 9 celebration marks a milestone in the sainthood cause, but Msgr. Deptula reminds that “we all have hopes there will be a bigger celebration in the near future.” He urged Sheen supporters to use the event to redouble their efforts as progress continues toward beatification and canonization.

“This is not the final event, and we all have a lot more work to do . . . and a lot more praying to do,” said Msgr. Deptula.