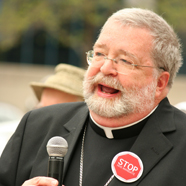 Photo Caption: “I have an obligation to protect the church’s ability to freel practice our religion,” said Bishop Jenky in filing the federal lawsuit on Aug. 9.

Seeking protection of the “most fundamental of American rights,” the Catholic Diocese of Peoria filed a federal lawsuit on Aug. 9 against Health and Human Services Secretary Kathleen Sebelius and the Obama administration.

In the 46-page suit — filed in the U.S. District Court for the Central District of Illinois, Peoria Division — the diocese outlines how the requirements are causing hardship by violating core religious and moral convictions and seeks a jury trial on the issues involved.

“This lawsuit is about one of America’s most cherished freedoms; the freedom to practice one’s religion without government interference,” said Patricia Gibson, attorney and chancellor for the Diocese of Peoria.

“It is not about whether people have access to certain services; it is about whether the government may force religious institutions and individuals to facilitate and fund services which violate their religious beliefs,” she added.

In filing the lawsuit, Bishop Daniel R. Jenky, CSC, said it was necessary because the federal government is taking no steps to correct what the church considers an intrusion on its First Amendment rights. The mandate, made final on Feb. 12, took effect Aug. 1 for nongrandfathered health plans that are not covered by a one-year “temporary enforcement safe harbor” for nonprofit organizations that oppose it for religious reasons.

“I have an obligation to protect the church’s ability to freely practice our religion,” said Bishop Jenky. “Fortunately, we have recourse to the Constitution and the strong conviction of our Founding Fathers who clearly intended to keep the government out of the internal affairs of the church,” he added, citing religious freedom protections in the First Amendment.

The diocese contends that although the government included an exemption for churches, the definition of “religious employer” was so narrow that it excludes Catholic hospitals, schools, universities and social service providers.

“The suit filed today asks the courts to find the HHS mandate in violation of the First Amendment of the Constitution as well as the Religious Freedom Restoration Act and the Administrative Procedure Act, which governs how government agencies propose and establish regulations,” she said.

The Diocese of Peoria suit is separate from those filed by 43 Catholic dioceses, schools, hospitals, social service agencies and other institutions in May. It was filed on behalf of the diocese by Jones Day, a Chicago-based law firm that is offering its services pro bono, according to Gibson.

“Hopefully the courts will take this seriously and see the issues at stake,” she told The Catholic Post.

Gibson said Bishop Jenky has received “overwhelming support” since taking the action, including from the priests of the diocese who have applauded his courage.

Meanwhile, the head of the U.S. bishops’ Committee on Pro-Life Activities called on Congress to “address this urgent and fundamental issue before it completes its business this year.”

“Timely and uniform protection of these rights cannot be expected from the current lengthy judicial process,” said Cardinal Daniel N. DiNardo in an Aug. 3 letter to members of the U.S. House and Senate.

Cardinal DiNardo said that despite “widespread opposition to this coercive policy by religious organizations, lawmakers and the general public, Congress has still taken no action to counter it.”