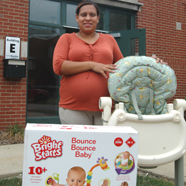 Photo Caption: Sara Ramos, Hispanic Outreach coordinator for Catholic Charities, is shown with some initial items donated to the new baby pantry, set to open along with a furniture bank on Sept. 12.

Catholic Charities of the Diocese of Peoria is seeking donations, volunteers, and clients for two new efforts to be located on its West Peoria campus.

A baby item pantry, under the patronage of St. Gianna Beretta Molla, will collect and distribute supplies for children from infancy to 2 years old. It will be a free service to all families in need, who may utilize the service once a month.

A furniture bank will offer donated furniture at low cost to screened clients of Catholic Charities or the St. Vincent de Paul Society around the Diocese of Peoria.

Both projects are set to open Sept. 12 and will be located in three large classrooms of the former Bishop Dunne School, 2900 W. Heading Avenue, West Peoria. Both will also accept donations from all areas of the diocese on a trucking schedule yet to be established.

“We’ll pick up donations in certain population pockets,” said Jack Maggiore, operations coordinator for Catholic Charities. He invited calls to Peggy Berry at (309) 636-8012 for more information on donating outside of the Peoria area.

A list of suggested items is included at the end of this story. The projects also need volunteer staff. The number of volunteers will determine the operating hours, which will be posted online at ccdop.org.

About 10 volunteers are sought for the baby item pantry, while two to four drivers are needed for furniture pick-up and delivery.

“This is uplifting of the human person,” said Maggiore of the furniture bank. “There’s pride in furnishing your own house.” As an example of pricing, Maggiore said couches will be offered at about $20 each, just enough to cover costs.

While selection may at times be minimal, Maggiore assured clients that “we’ll fit your needs.”

The projects are being coordinated by Sister Ana Pia Cordua, STJCM, president of Catholic Charities, Maggiore, and Sara Ramos, coordinator of Hispanic outreach.

St. Gianna was an Italian pediatrician, wife, and mother who refused an abortion and hysterectomy when complications arose prior to the birth of her fourth child. St. Gianna died at age 39 within a week of her daughter’s birth. She was canonized in 2004 and is considered a pro-life and pro-family patron.