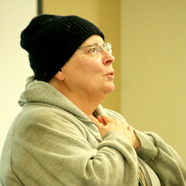 Photo Caption: Barb Liska, regional director of education for the Rock Island, Henry and Kewanee vicariates, challenged catechists with her words and appearance.

Very few people recognized the woman who silently entered the conference room at the Spalding Pastoral Center in Peoria and stood along the outer edges of the room, but there was more than one glance in her direction.

It wasn’t only the black stocking cap and sunglasses that made her stand out. She was dressed in a soiled dress and gray sweatshirt with a hood, which seemed out of place for the warm August day.

Without a word being said, the first lessons of the Catechetical Leadership Conference had begun.

The woman was Barb Liska, the regional director of religious education for the Rock Island, Henry and Kewanee vicariates of the Diocese of Peoria, and her silent witness provided the foundation for the day’s opening reflection, “Meeting Jesus 25 Cents at a Time.” Drawing from Jane Knuth’s 2010 book, “Thrift Store Saints: Meeting Jesus 25 Cents at a Time,” Liska challenged the 170 catechists and directors of religious education to see the people around them in new ways.

Sponsored by the diocesan Office of Catechetics, the entire conference invited those involved in faith formation around the diocese to take a fresh look at their programs, share ideas and get to know one another. In addition to workshops by grade level that allowed them to make connections between their texts and the diocese’s Curriculum Guidelines, those who attended were able to choose from 10 workshops that covered sacramental preparation, using technology in the classroom, Hispanic ministry, and safe environment training.

Packets filled with resource materials for first reconciliation and Communion, confirmation and the Rite of Christian Initiation of Adults (RCIA) also were made available to the catechists and DREs.

“Our goal is that you leave with something in your hands that you can use with your youngsters, so you’re ready for them,” said Dr. Vincent McClean, director of the Office of Catechetics.

THE FACE OF JESUS
“I’m sure you found my garb disturbing,” Liska told the catechists and DREs when she finally made her way to the podium. “I thought about how uncomfortable I am with poverty. . . . How and what can we learn from those we encounter every day and in the most unlikely places?”

Not only are these encounters “a call to holiness,” Liska said, but “our opportunities to experience Christ.”

“We did not sign on to take care of the hurting children of God when ‘Won’t-Take-No-For-An-Answer’ Sister asked us to read some Bible stories to the children and turn them into happy, never-miss-a-Sunday Catholics,” she said, “but sometimes those are who we have.”

She encouraged her listeners to treat the struggling children who don’t do their homework or learn their prayers — as well as their parents — with consideration and compassion even in the toughest circumstances.

Perhaps a parent will return to the church because of the time a catechist or DRE spends listening to them, she said, noting that many unexpected blessings come from these encounters each week.

“May our legacies be not about ourselves, but about the gift God calls us to share,” Liska said.

Later she appeared as herself to present a workshop with catechists Nancy Humphrey and Pam Williams of Our Lady of Guadalupe Parish in Silvis about creative ways to share the faith with children in kindergarten and first grade.

THE MODEL TEACHER
Alan Anderson, the regional DRE for the LaSalle and Ottawa vicariates, encouraged the catechists to keep going by looking at “Jesus as the Model Teacher.”

Even disciples who knew Jesus needed to be catechized and recatechized by the Master Teacher, Anderson said, citing the passage from Luke’s Gospel about what happened on the road to Emmaus.

“My goal as a teacher is very similar to Jesus’ goal. I’m trying to bring my students to the point where they can listen to a homily intelligently,” Anderson said. “God will provide the encounter with Jesus Christ in his own good time. . . . It may not be you. I think catechists feel that pressure.”

Even Jesus had difficulty performing miracles from time to time, he reminded them, saying it is important to draw strength from successes and not get bogged down in the occasional failure.