At Georgetown, Ryan defended budget as fruit of Catholic teaching 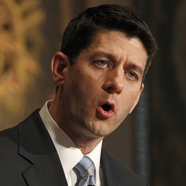 WASHINGTON (CNS) — Wisconsin Republican Rep. Paul Ryan defended his party’s 2013 federal budget, which has drawn Catholic criticism, as a way to help all Americans gain a better life, free of government intrusion and overreach, in a speech at Georgetown University.

Citing principles of Catholic social teaching that promote the full involvement of people in the decisions that affect their lives, Ryan invited “well-informed public discourse” on the direction of the country as it debates how best to meet current and future needs in health care, Social Security and job creation.

“As a Catholic in public life, my own personal thinking on these issues has been guided by my understanding of the church’s social teaching,” Ryan said in delivering the annual Whittington Lecture sponsored by the Georgetown Public Policy Institute April 26. “Simply put, I don’t believe the preferential option for the poor means a preferential option for big government.”

Ryan, chairman of the House Budget Committee, acknowledged to the Gaston Hall audience that the church’s social teaching can lead Catholics to arrive at different conclusions on the role of government in society. He said his understanding of church teaching requires that he work to ensure that the country remains financially solvent and unburdened by debt that would lead to severe austerity measures in the future.

The Republican budget, drafted by Ryan and approved by the House of Representatives in a largely party-line vote March 29, delineates a decade-long plan to reduce spending on nonmilitary programs as a step toward significantly reducing the country’s $15 trillion budget deficit. The budget calls for simplifying the tax code by closing loopholes and lowering individual and corporate tax rates. Under the plan the highest tax rates would be set at 25 percent, down from 35 percent.

Ryan maintained that under the plan the country would see increased revenues from those who take advantage of loopholes and tax shelters, ensuring “a level playing field for all.”

The plan has been criticized by a wide cross-section of Catholics, including two committee chairmen of the U.S. Conference of Catholic Bishops, theologians, social justice advocates and college faculty members.

Ryan said his inspiration for shaping his budget plan is taken from Catholic social teaching and Pope Benedict XVI’s encyclical “Caritas in Veritate” (“Charity in Truth”). He cited the principles of subsidiarity and solidarity as keys to securing a future in which everyone has the opportunity to achieve and to preserving the public safety net for those citizens who are truly in need.

The principle of subsidiarity as found in Catholic social teaching calls for decisions to be made and actions taken at the most local level possible.

“As we end welfare for those who don’t need it, we strengthen welfare programs for those who do,” Ryan said. “Government safety-net programs have been stretched to the breaking point in recent years, failing the very citizens who need help the most.”

Ryan criticized President Barack Obama for what he called a failure to lead the country out of fiscal crisis and said that the economic model the administration has followed has caused unparalleled growth in the nation’s budget deficit.

The Wisconsin representative also called for the end of Washington-based decision-making that “takes from hardworking Americans and gives to politically connected companies and privileged special interests.” He said his view of the role of government seeks to return decision-making to local communities so people can have a say in the policies that affect their lives.

Ryan’s appearance at Georgetown was met with protests both before his campus visit and during it.

Halfway through his speech, nine Georgetown students stood in the balcony of Gaston Hall and unfurled a banner that read: “Stop the war on the poor; no social justice in Ryan’s budget.” The students stood silently through the remainder of the hourlong program.

One of the student protesters, senior Gina Bull, 22, said she was concerned that the House-passed budget would decimate programs that help poor and vulnerable people while allowing the wealthiest Americans to reduce their tax share.

A group of 88 Georgetown University faculty and staff members sent a letter to Ryan April 24 outlining their concerns over his “misuse of Catholic teaching” to defend his budget plan. The letter pointed to Ryan’s reference to the principle of subsidiarity, which he has used to justify reduced expenditures in nonmilitary areas of the budget and an overhaul of the tax code.

“I don’t think he can get away with Catholic social teachings as a cover for his budget cutting,” said Jesuit Father Thomas Reese, who organized the distribution of the letter on campus.

“Since Ryan is coming to our campus, the faculty felt that he couldn’t just come and leave, but we should initiate a dialogue, a challenge to him because frankly we don’t agree with his interpretation of Catholic social teaching,” Father Reese said.

Along with the letter, the group included a copy of the official Compendium of the Social Doctrine of the Church, Father Reese said.

Ryan acknowledged receiving the letter and thanked the writers for a new copy of the compendium because his had become well worn.

In response to a question from Edward Montgomery, dean of the Georgetown Public Policy Institute who moderated the program, Ryan brushed aside talk that he was being considered a possible nominee for the vice presidency on the Republican ticket in the fall election.

“Look, I’ve got an important job where I am right now,” he said. “I’m content with this job. I feel that America is at a very unique moment. Don’t underestimate the importance of Congress in all this. Who knows about all those things? Quite frankly, we’ve got some important work to do in the House.”