Our appetite for violence sours with its real taste 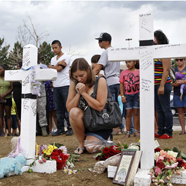 Photo Caption: A woman prays at a memorial July 22 for victims behind the theater where a gunman opened fire on moviegoers in Aurora, Colo.

A Catholic life embraces mystery on so many levels. We don’t know how the bread and wine become the body, blood, soul and divinity of Christ. We don’t know what heaven is really like. Our rosary meditations help us reflect on mysteries of joy, sorrow, glory and light in the lives of the Blessed Mother and Jesus. We don’t know why some funerals are for infants, and some are for 100-year-olds.

There is no know-it-all Catholic. And if you think you are one, prepare to be humbled by the Holy Spirit.

So when something horrible happens, like the theater shooting in Colorado, a faith-filled person can cry out “Why?” and at the same time accept there may not be an answer coming. In such difficult times — and we all encounter them to varying degrees — we do best by turning to the mystery of faith we profess at Mass: “Save us, Savior of the world, for by your Cross and Resurrection you have set us free.”

Our writing today is not an attempt to answer why the Colorado shooter gave in to such evil. We don’t know. And in no way do we wish to portray the victims, many of whom were heroic in final self-sacrificing acts, as anything but innocent.

But at some point a follower of Jesus has to question the appetite for violence in our entertainment that Hollywood eagerly responds to in serving up on-screen explosions, shootings, car crashes, and worse.

Catholic News Service’s review for “The Dark Knight Rises,” for example, said the film was not for young Batfans because of “the bone-breaking nature of the mayhem on display” and “frequent and intense action violence, including gunplay.” And the Batman series is mild when compared with much that entertains us on both large and small screens. Earlier this month Universal Pictures gave us the drug-lord themed movie “Savages,” which features “pervasive brutal and grisly violence, including gunplay, torture and rape,” according to CNS.

We could cite countless examples present and past, and it’s not just movies and television. The CNS review of this summer’s video game release “Ninja Gaiden 3” calls it morally offensive for a host of reasons including “gratuitous violence with gore, including the massacre of unarmed opponents, and possible suicides.” Gamers are frequently forced to cut down unarmed soldiers begging for their lives, we’re told, with no other option available.

We realize on-screen violence is often part of a story that eventually honors and promotes the good. We understand that violence is even found, dramatically so, in Scripture. Our Lord was brutally killed. But somewhere there is a line between violence as a function of storytelling, and violence for entertainment’s sake. The same can be said for sex scenes and profanity. Hollywood seems more than happy to cross those lines to feed our appetites.

The Colorado massacre reminds us the taste of real violence is bitter beyond words — as far from entertaining as the east is from the west.

So how do we know where the line is in our own viewing habits? We suggest imagining Jesus seated in the theater seat next to us, or on the couch watching that TV show, or beside us playing the video game. Would we be comfortable? Would he?

If the answer is no mystery, we’ve found the line. — Thomas J. Dermody, Editor, The Catholic Post