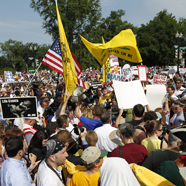 Photo Caption: People for and against the administration’s health care reform law demonstrate in front of the U.S. Supreme Court building in Washington June 28.

The court found that although the individual mandate in the 2010 health reform law does not pass constitutional muster under the Commerce Clause of the Constitution, it can be upheld as an acceptable exercise of Congress’ taxing powers.

In a 65-page opinion announced by Chief Justice John Roberts, five members of the court upheld the Patient Protection and Affordable Care Act in full but limited the federal government’s right to withhold its share of Medicaid funding from states that do not expand the health program for the low-income and disabled as mandated by the law.

“The U.S. Conference of Catholic Bishops has not joined in efforts to repeal the law in its entirety, and we do not do so today,” said a USCCB news release issued shortly after the decision. “The decision of the Supreme Court neither diminishes the moral imperative to ensure decent health care for all, nor eliminates the need to correct (the law’s) fundamental flaws.”

Sister Carol Keehan, president and CEO of the Catholic Health Association, said she was pleased that the health care law “has been found constitutional and will remain in effect.” The Daughter of Charity noted that CHA had submitted friend-of-the-court briefs urging the court to find in favor of the individual mandate and the Medicaid expansion.

“In the coming weeks and months, we will continue working closely with our members, Congress and the administration to implement the ACA as fairly and effectively as possible,” she added.

However, CHA has agreed with the bishops in urging the government to expand its definition of religious employers who are exempt from the requirement to provide contraceptives and sterilization free of charge to their employees.

Joining Roberts in the majority opinion were Justices Ruth Bader Ginsburg, Stephen Breyer, Sonia Sotomayor and Elena Kagan, although Ginsburg differed from the other four on whether the mandate was constitutional under the Commerce Clause.

Dissenting were Justices Antonin Scalia, Anthony Kennedy, Clarence Thomas and Samuel Alito, who would have overturned the entire law as an unconstitutional violation of the Commerce Clause.

By forcing those who are young and healthy to purchase health insurance, the law compels those who do not wish to participate in a particular marketplace to do so, the dissenters said.

“If Congress can reach out and command even those furthest removed from an interstate market to participate in the market, then the Commerce Clause becomes a font of unlimited power, or in (Alexander) Hamilton’s words, ‘the hideous monster whose devouring jaws … spare neither sex nor age, nor high nor low, nor sacred nor profane,'” said the dissenting opinion, written by Scalia.

The decisions do not affect other lawsuits against the health reform law’s requirement that most religious employers must provide contraceptives, including some abortion-causing drugs, and sterilization to their employees at no cost. Those cases are still in lower courts and have not yet reached the Supreme Court.

But Charmaine Yoest, president and CEO of Americans United for Life, said the Affordable Care Act “forces an abortion agenda on the American people unlike anything seen since Roe v. Wade,” the 1973 Supreme Court decision that lifted most state restrictions on abortion.

The opinions issued by the court June 28 actually involved four separate challenges to the constitutionality of the health reform law. The court first had to decide whether the Anti-Injunction Act, which says no tax can be challenged in court before it is due, precluded a challenge to the Affordable Care Act until after the individual mandate takes effect in 2014. The majority decided that it did not.

The next question was whether the individual mandate — also called a “shared responsibility payment” — exceeded Congress’ authority to “regulate commerce” or to impose taxes. Roberts played the key role in deciding that, siding with the dissenters on the commerce question but with the majority on the tax question.

If the mandate had been overturned, the court would have had to decide whether the entire health law must fall if one section does — the so-called “severability” issue. But the affirmation of the mandate made that question moot.

Finally, the court faced the question of whether Congress could penalize states that opt out of the law’s requirement to expand their Medicaid programs. In its early years the expansion is mostly funded by the federal government, but states are expected to take over funding the coverage in later years.

The court ruled that the federal government cannot threaten states with the loss of their existing Medicaid funding if they do not participate in the expanded Medicaid program.