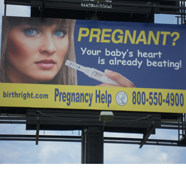 Photo Caption: This billboard message is seen by hundreds of drivers every day along Route 51 north of the DeWitt County village of Wapella.

WAPELLA — Be sure to look up as you drive north on Route 51 coming out of Wapella. The members of St. Patrick’s Church have a special pro-life message to share and they’re doing it in a big way.

For the next six months, St. Patrick’s Altar and Rosary Society and Parish Council are sponsoring a 13-by-25-foot billboard that says, “Pregnant? Your baby’s heart is already beating!” It features the 800 number and web address for Birthright International, which assists women and girls facing unplanned pregnancies.

“These billboards are not full size. They’re a little smaller so there is no room for our (parish) logo,” said Karen Powers, president of the Altar and Rosary Society. “We got the sign and the Birthright number and those were the two most important things.”

The idea for sponsoring the billboard came from Dave Szymkiewicz, a longtime parishioner who was looking for a way to let the community know about parish activities. The 100-family faith community actively promotes respect for life, so he started sharing his thoughts about a billboard.

“It’s so people who look at it can act on it. That’s why we wanted to make sure there was a phone number on there,” Szymkiewicz told The Catholic Post.

Another parishioner, Sandy Snow, had been using the billboard for her business. With financial support from St. Patrick’s Parish Council and Altar and Rosary Society, Szymkiewicz was able to sign a lease with WC Media Outdoor Advertising when Snow’s lease expired.

The next step was selecting a poster. For that they went to Billboards for Life.

“He got the choices down to 20 — he wanted us to help make the decision because we were backing it as well as the parish council,” Powers said.
She explained that a nurse practitioner who works with pregnant girls suggested the one they eventually selected based on her experience.

Szymkiewicz said it cost about $400 to have the poster made and installed, which was his donation to the project. The lease runs $350 a month.

CHALLENGE ISSUED
“It really catches your eye,” he said. “It might be a little aggressive for some people and I understand that. But it’s an important issue. We need to make the message clear.”

“God was guiding us,” Powers said. “They had some obstacles, but everything fell into place within three days.”

She said it has been an “awesome experience.”

“In our small area, maybe we can help some girls. We don’t have a lot of outlets,” she said. “If it helps one person avoid that abortion, we feel it’s a worthwhile cause.”

“We’re not a huge parish, but we feel confident that we can at least keep the billboard going for another six months. Then we will re-evaluate,” she said. “The goal is to keep it up for a long time.”

And Powers has a challenge for other parishes of the Diocese of Peoria.
“Maybe this will show that a small parish can promote pro-life. You don’t have to have tons of money,” she said. “We hope we can get three more billboards in the diocese. Our diocese is large enough that it could go from one side of the state to the other.”