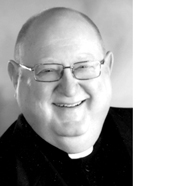 Photo Caption: Father Gerald Verdun is marking both his 40th jubilee of ordination to the priesthood and his move to senior status effective June 13.

DELAVAN — For someone who has visited 100 countries, Father Gerald Verdun would have been happy with a simple celebration of two major milestones: his 40th anniversary as a priest of the Diocese of Peoria and his move to senior status.

“A keg of beer, chips, and pretzels would have done it,” he told The Catholic Post this week. But the people of St. Mary’s Parish, Delavan, and St. Joseph’s Parish, Hopedale — faith communities he has guided for the last dozen years — have bigger plans for their pastor.

“They’re planning quite a shindig,” said Father Verdun of the June 3 celebration that begins with the 10:30 a.m. Mass at St. Mary’s, Delavan, and continues with a luncheon and open house from 11:30 a.m. to 3 p.m.

Father Verdun, 70, a native of Odell who was ordained a diocesan priest four decades ago, has been granted senior status by Bishop Daniel R. Jenky, CSC, effective June 13. He plans to live in an apartment on the south side of Bloomington and spend more time with his mother, Helen Verdun, who is 94 and residing in Pontiac.

Father Verdun credits the priests who served in Odell — especially Msgr. James Garrahan — as well as his 12 years of Catholic education at St. Paul’s grade and high school there for influencing his vocation.

“We had several vocations from Odell,” recalled Father Verdun, who admitted he fought his calling early in life but decided to plan for the seminary while in the middle of a four-year stint with the U.S. Air Force that took him to Japan and Pakistan.

Upon returning in 1966, he completed his studies for the priesthood at St. Ambrose College in Davenport, Iowa, and St. Paul’s Seminary in St. Paul, Minn.

Father Verdun’s priestly life has been spent in service to parishes. After being ordained by Bishop Edward W. O’Rourke on May 20, 1972, he served as parochial vicar for periods at St. Patrick’s, Danville; St. Joseph’s, Pekin, and Epiphany, Normal.

From 1978 to 1980, he served as pastor of Immaculate Conception, Carthage; Sacred Heart, Dallas City, and St. Mary’s, West Point. For the next eight years he was pastor of St. Joseph’s, Colfax — where he guided construction of a parish hall — and St. Rose, Strawn.

Following three years as parochial vicar of St. Matthew’s, Champaign, he served for a year as pastor of St. Anthony’s and St. Casimir’s parishes in Streator.

Father Verdun returned to Pekin as pastor of St. Joseph’s Parish from 1994 to 2000, when he was named to lead the Delavan and Hopedale parishes.

He said the people in Delavan and Hopedale are “just like the people in my hometown” of Odell — very friendly and cooperative. “It’s a nice assignment,” he adds.

Father Verdun’s stint in the Air Force gave him the travel bug, and he has been a world traveler, frequently leading group tours often in tandem with Father David Heinz. Among his favorite destinations have been Africa for safari, Ireland, and Bavaria. He’s been to China three times.

But it’s the priesthood adventure he recommends to those considering their vocation. “Seminary life isn’t something to be afraid of. Try it for a semester or a year,” he advises.