Getting more out of Mass easy as 1-2-3: Champaign speaker 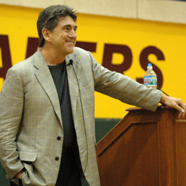 Photo Caption: Dr. Marcellino D’Ambrosio takes a question from one of nearly 300 Catholics from the Champaign vicariate who gathered for “Catholic Connected: Beyond the Pew” on April 29.

CHAMPAIGN ? Want to get more out of Mass? It’s easy as 1-2-3 and yet powerful enough to change history, hundreds of representatives from 19 Champaign-area faith communities were told Sunday night.

“If we want to get more out of Mass, we need to bring more to it,” said Dr. Marcellino D’Ambrosio, keynote speaker at the fourth annual “Catholic Connected: Beyond the Pew” gathering of parishes of the Champaign vicariate.

In an hourlong talk filled with humor and practical advice for Catholic living at The High School of Saint Thomas More, D’Ambrosio explained the ways God is powerfully present at every Mass even if no one is singing and the homily is less than inspirational. But Catholics need to better prepare for Mass in order to encounter God in a way that transforms us — which is what he said the Eucharist is meant to do.

A Texas-based author and theologian who often appears on the Eternal World Television Network, D’Ambrosio called faith “a spiritual muscle that grows when it is exercised.”

He suggested three ways for Catholics to get ready for Mass:

1) Come to Mass “pre-prayed.” As the father of five, D’Ambrosio knows it can be a challenge just to get to Mass on time. But even if it means praying in the car, he said, it’s important to pray for growth in faith before Mass starts.

2) Come to Mass hungry spiritually. In addition to the hourlong fast from food, D’Ambrosio suggested fasting from distractions such as television, texting, and social media for an hour or two before Mass.

3) Bring more mercy to Mass. Make conscience decisions and actions to forgive those who have offended you.

“If you do 1, 2 and 3 we are going to see changes in us and in our kids,” promised D’Ambrosio. “We’re going to be happier and God is going to use us and change history through us.”

D’Ambrosio was introduced by Jennifer Roscoe, a newscaster for WCIA-TV and a member of St. Matthew’s Parish who served as master of ceremonies.

She described the former musician-turned-evangelist as a “doctor who makes house calls” in order to “give churches a shot in the arm.”

“My hope is that tonight you are reminded why you are Catholic,” she told the group of nearly 200 who gathered in the school’s gym.

Planned by a 13-member team, “Catholic Connected” is an annual large-group collaboration of the vicariate’s parishes. The first three events took place at the Krannert Center at the University of Illinois. Like those gatherings, this year’s “Catholic Connected” promoted unity by featuring a backdrop of banners representing all parishes of the Champaign vicariate.

Seven priests were in attendance, and musical selections were provided by The High School of Saint Thomas More Choir Ensemble. Members of the various parishes enjoyed a social time after the presentation in the high school’s cafetorium.

“We thank God for our parishes, for our vicariate, for our diocese, and for
our universal church,” said Father Stephen Willard, pastor of Holy Cross Parish in Champaign which took the lead in planning this year’s event. Father Willard gave opening remarks and the closing prayer.

This year’s “Catholic Connected” began with an afternoon gathering for the region’s Spanish-speaking Catholics at the St. Mary’s Parish Center. About 100 attended a presentation by D’Ambrosio.

His evening talk centered on the Mass and included explanations of four ways Christ is present at every celebration of the Eucharist, including:

1) In the assembly. Too many Catholics don’t appreciate the teaching that “the whole Catholic Church is mystically present” at every Mass, including the Church Triumphant already in heaven. “Even before the priest walks in, the Lord is there” said D’Ambrosio, who urged Catholics need to realize the “invisible power” that is there, even if those in the pews that day seem like a “motley crew” who aren’t fully participating.

2) In the priest. “They’re sinners just like you,” said the speaker, but “Christ’s priesthood is made present through them.” Catholics need to pray for their priests because “they have a big bulls-eye on their backs,” he added.

3) In the proclaimed Word. Scripture is “a living word,” explained D’Ambrosio, which is why we stand for the Gospel and why the Book of the Gospels is reverenced. In fact the entire Mass is “chock-full of Scripture” in prayers and responses.

Far from boring, holiness “is where the action is,” said D’Ambrosio, who also took several questions from the crowd at the end of his talk.

“The real adventure is following Christ,” he said. “Following Jesus is the most exciting thing in the world.”