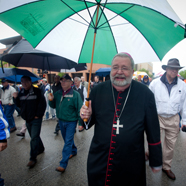 Photo Caption: Bishop Jenky walks through downtown Peoria with more than 500 participants in the April 14 “A Call to Catholic Men of Faith.”

“Heroic Catholicism, not casual Catholicism” is required to confront state and federal threats to religious liberty and the church’s public ministries, Bishop Daniel R. Jenky, CSC, told more than 700 men, many of whom had marched through downtown Peoria in a steady rain April 14 in a public defense of the faith.

He warned participants in the “A Call to Catholic Men of Faith” rally that Catholic schools, hospitals, and Newman Centers “could easily be shut down” by the fall of 2013 rather than cooperate with the government’s mandate that most health plans cover the cost of contraception, sterilization and some drugs that can induce abortion.

“No Catholic institution, under any circumstance, can ever cooperate with the intrinsic evil of killling innocent human life in the womb,” the bishop said.

After joining the men on a silent, mile-long walk from the Peoria riverfront to St. Mary’s Cathedral, Bishop Jenky used some of the strongest language yet by a church official in protesting the U.S. Department of Health and Human Services’ mandate. (See full text of the homily here.)

The bishop mentioned President Barack Obama three times in his homily at the rally Mass.

“In clear violation of our First Amendment rights,” said Bishop Jenky, “Barack Obama with his radical, pro-abortion and extreme secularist agenda now seems intent on following a similar path” as other governments throughout history who “have tried to force Christians to huddle and hide only within the confines of their churches.”

The bishop’s naming of Adolf Hitler and Josef Stalin on that list of historical forces and figures who denied religious liberty drew objections from some quarters and became the focus of widespread discussion, pro and con.

The Obama administration’s contraceptive mandate includes a religious exemption, but leaders of various Catholic and other faith-based organizations say it is too narrow and they will still be forced to provide coverage they oppose. The administration has defended the mandate as “preventative care,” but religious groups that oppose it say it infringes on their religious liberty.

A new federal proposal issued March 21 suggested third-party administrators pay the costs of contraceptives for religious employers who object, but the U.S. bishops said even with that, the mandate remained flawed.

To sustained applause, the bishop said no matter what happens in “this passing moment,” Christ will win and the church will survive current threats, just as it has endured persecutions from the Roman Empire through Nazism and communism.

“In the power of the Resurrection,” Bishop Jenky said forcefully, “the church will survive the hatred of Hollywood, the malice of the media, and the mendacious wickedness of the abortion industry.

“The church will survive the entrenched corruption and sheer incompetence of our Illinois state government,” he continued, “and even the calculated disdain of the President of the United States, his appointed bureaucrats in HHS, and of current majority in the federal Senate.”

Last year, legislation on civil unions and subsequent court rulings forced Catholic Charities agencies throughout Illinois out of adoption and foster care. The HHS mandate, said Bishop Jenky, because of its narrow religious exemption, now threatens “all our public ministries, only excepting our church buildings.”

Bishop Jenky said “this is not a war where any believing Catholic may remain neutral.”

“No Catholic ministry — and yes, Mr. President, for Catholics our schools and hospitals are ministries — can remain faithful to the lordship of the Risen Christ and to his glorious Gospel of Life if they are forced to pay for abortions,” said Bishop Jenky. He said every practicing Catholic “must vote, and must vote their Catholic consciences” in the fall elections.

“Our faith, when it is fully lived, is a fighting faith and a fearless faith” grounded in the same power and truth of the resurrection that transformed Jesus’ first disciples from confusion and fear to become bold evangelizers of the Risen Christ, said Bishop Jenky.

He used the ninth annual “A Call to Catholic Men of Faith” rally to recruit “a fearless army of Catholic men ready to give everything we have for the Lord, who gave everything for our salvation.”

The men who took part in the rally showed signs of that fearlessness when they stood in a steady rain during an outdoor 30-minute program on the banks of the Illinois River.

“I feel more and more and more the Catholic Church is under attack, and it is good for everyone to come out and stand up and show we’re not going to knuckle under,” said Ken Arvin of St. Mary’s Parish in Metamora, who attended the rally with his son, Nicholas.

It was the fifth time that Father Ron Dodd, pastor of St. Mary’s Parish in Odell, had taken part in the annual march and Mass. He said rain wasn’t going to keep him from making the 90-minute drive to Peoria or accompanying the men on the one-mile walk.

“To look out from the altar and see a cathedral filled with all these men is very uplifting,” Father Dodd said at a fellowship lunch concluding the event. He said the annual rally — a grassroots response to a 2003 challenge from Bishop Jenky for Catholics to “rise up and defend our faith” — is so important to him that “someday if I’m in a wheelchair they’ll have to push me” on the walk route.

During the opening program, Father Anthony Co, an assistant chaplain at St. John’s Catholic Newman Center at the University of Illinois, said that men too often measure their worth, and even their spirituality, by their accomplishments.

“We end up thinking to be a good father I have to have perfectly behaved kids,” said Father Co. “To be a good priest, I have to produce numbers at Mass and avoid drama in the parish.”

He urged the men to frequently “rest on the Father’s heart” as Jesus does, through prayer and an active trust in God’s promises.

“On the Father’s heart is where our manhood is formed,” said Father Co. “That is where we find our strength.”

Because the rally took place on the eve of the Feast of Divine Mercy, each participant received a medallion with the Divine Mercy image. “A Call to Catholic Men of Faith” was planned by a 20-member committee headed by Tim Roder, director of the diocesan Office of Family Life.

It takes place annually on or near the feast of St. Joseph the Worker. At the riverfront rally, Father Jerry Logan, parochial vicar at St. Pius X Parish in Rock Island, led the group in the Litany of St. Joseph. He encouraged fathers to bless their children every day before school and prior to bedtime, and distributed vials of oil from St. Joseph’s Oratory in Montreal for that use.