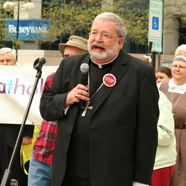 EDITOR’S NOTE: On Friday, March 23, more than 120 communities around the United States hosted “Stand Up for Religious Freedom” rallies calling on the U.S. government to drop a mandate from the Department of Health and Human Services forcing employers, including religious ones, to provide coverage of contraception, sterilization, and abortifacients in their health insurance plans.

In downtown Peoria, about 250 people gathered at the Peoria County Courthouse plaza over the lunch hour for an ecumenical rally sponsored locally by Central Illinois Right to Life. Among the speakers was Bishop Daniel R. Jenky, CSC. Following is the full text of his remarks.

An album of photos from the rally may be viewed at The Catholic Post’s Facebook site online.

Somebody might wonder, what’s all this fuss about? Well, I have a one-word answer, at least at the top of the priorities of my faith community, and it has to do with our unwavering commitment to the Gospel of Life.
HHS wants us to fund the morning-after pill. For us, that is participation in intrinsic evil and we can never do it. So we will resist that by every strength we may have and that God will give us.

The majority of Americans, after all these years of 52 million abortions, do not support abortion on demand. Yet they are asking faith communities to pay for it. Once again, our schools, our hospitals, all our public ministries will not cooperate.

The second great issue has to do with our civil rights as believers. The government is trying to define for us what is ministry. Their so-called exemption extends only to places of worship, not to schools, hospitals and a myriad of services that all sorts of faith groups regularly do. This goes against the words of Scripture. Where we are gathered together to worship God we are celebrating what we do in our ordinary lives. Those are holy things and no government in the United States can tell us what ministry is and what ministry is not.

We will not cooperate!

I’m a Holy Cross priest, which means I used to serve at the University of Notre Dame. My community was founded in France. They passed anti-clerical laws in France in 1904 and 1906. They seized five of our colleges. In fact, they shut down every school and hospital and institutional ministry in France until really somewhere in the 1920s. That is what this government, in our free democracy, is trying to do now.

We have 47 Catholic grammar schools, seven Catholic high schools, about 10 Catholic hospitals and so many other things. The government will shut us down because we will not do this. Maybe that’s what they want, I don’t know. We will resist.

This is not a battle that myself or other folks of good will and believers of other faith traditions were looking for. By the way, 52 Eastern Orthodox bishops in this country stand with us on this. Many other faith groups have. They realize if they can do it to Catholics, evangelical Christians and other folks, they can do it to everybody else. We will not and cannot cooperate.

Do I feel comfortable getting involved in what is, after all, kind of a political stance? No! But we didn’t pick this fight. So we have to stand up to the moment, be united. We should all stand against this evil.

Remember, the One who is in us is greater than the one who is in the world. So we have finally nothing to fear. God bless you all.