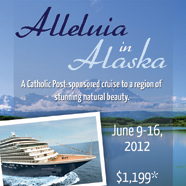 Have you always wanted to experience the beauty and charm of Alaska?

Then join other readers of The Catholic Post, their families and friends aboard Holland America Line’s fabulous Westerdam for “Alleluia in Alaska,” a Post-sponsored cruise scheduled for June 9-16, 2012.

Msgr. Paul Showalter, vicar general of the Diocese of Peoria, will be spiritual director for the cruise, which will depart from and return to Seattle, Wash.

“When The Catholic Post sponsored a Caribbean cruise in 2009, we asked our 90 guests where they would like to go if we planned a second cruise,” said Tom Dermody, editor of The Catholic Post, who will also be on ship offering information and assistance. “The overwhelming first choice was Alaska. It seems to be on a lot of ‘bucket lists,’ and with good reason!”

The Westerdam will travel through Seattle’s beautiful Puget Sound and the Strait of Juan de Fuca on its way to Alaska’s deep green islands, ice-blue glaciers and charming frontier towns. Ports of call include Juneau, Glacier Bay, Sitka, Ketchikan, and the scenic harbor of Victoria, B.C. Optional excursions such as whale watching, visits to glaciers, salmon fishing, and trolley rides through historic settlements are offered at the various ports.

As they experience the region’s natural beauty, cruisers may express their praise and gratitude during daily Mass or rosary. Entertainment and dining options abound on the Westerdam, a Vista-class ship with a passenger capacity of 1,900. Holland America Line offers a host of special touches aboard its fleet of ships. The Westerdam, for example, is filled with original art, much of it on the theme of Dutch heritage in the New World.

The cost of the cruise is $1,199, which includes an inside stateroom, all meals aboard ship, government taxes and fees. The sum does not include transportation to and from Seattle. Group travel options will be offered.

For more information or to reserve your place aboard ship, call Donna at 1-800-226-0902, or e-mail drizzo@dsttravel.webmail.com.