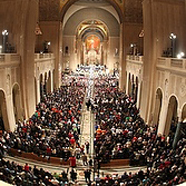 WASHINGTON (CNS) — Every child and adult with special needs, every unwanted unborn child and every person who is “poor, weak, abandoned or homeless” is “an icon of God’s face and a vessel of his love,” said Philadelphia Archbishop Charles J. Chaput.

“How we treat these persons — whether we revere them and welcome them, or throw them away in distaste — shows what we really believe about human dignity, both as individuals and as a nation,” he said Jan. 22 in a keynote address at a pro-life conference in Washington.

He was the keynote speaker at the 13th annual Cardinal O’Connor Conference on Life at Georgetown University. It is named for the late Cardinal John O’Connor, archbishop of New York from 1984 to 2000. The student-run conference drew more than 700 young people and adults.

In his keynote, Archbishop Chaput talked about “the kind of people we’re becoming and what we can do about it,” illustrating his theme by outlining the current situation facing unborn babies shown by genetic testing to have Down syndrome. He said he has friends who have children with disabilities, in particular Down syndrome. He noted that about 5,000 children with the genetic disorder are born in the U.S. each year, and currently there are about 400,000 people in the country with Down syndrome. But that population “may soon dwindle,” he said.

“And the reason why it may decline illustrates, in a vivid way, a struggle with the American soul. That struggle will shape the character of our society in the decades to come.”