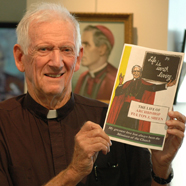 From roots in the Diocese of Peoria, they have gone on to proclaim the Gospel for decades around the globe in places like Bolivia, Kenya, Peru and Guatemala.

But on Oct. 16, the Maryknoll missioners were back home, sharing the joy of their order’s yearlong centennial observance with the family and friends who have faithfully supported their efforts.

“We can’t do what we do without your support and kindness, and that’s been going on for 100 years,” said Maryknoll Father James J. Madden, a native of Champaign. Father Madden was homilist at a Mass at St. Mary’s Cathedral in Peoria that was concelebrated by Maryknoll priests, including Peoria native Father Bill Donnelly (see story below) and Bloomington native Father Michael Gould.

Maryknoll Sister Joan Berninger, raised in Peoria, was in the assembly.

“YOU ARE A PART OF IT, TOO”
Father Madden, who spent much of his priestly life high in the Andes Mountains of Peru serving the indigenous Aymaran population, said the Diocese of Peoria’s “great, long tradition” of making mission a priority is reflected in the very design of its cathedral. The stained glass windows tell the story of the spread of the Gospel throughout history, and even include a representation of the founders of the U.S.-based mission movement now known as Maryknoll.

Large letters etched in the sanctuary floor proclaim the scriptural quote “From the rising of the sun to its setting, may the name of the Lord be praised.”

“We are proud to be a part of that, just as you are a part of it,” said Father Madden.

Using his experiences in Peru as an example, Father Madden described how Maryknollers announce the good news of Jesus, respect the culture in which they live, and work to overcome injustices and suffering experienced by the peoples they serve.

The Aymaran people have taught Father Madden much, including how to respect nature and how to live and work together as a community. He noted that at the beginning of Masses in the mountains of Peru, for example, the Aymarans do more than voice the words of the penitential rite asking their brothers and sisters for forgiveness.

“They actually do it,” he said. “Everyone forgives everyone personally. That is powerful. We need to learn that.” Father Madden ended the cathedral Mass by blessing the assembly in the Aymaran language.

EXTRAORDINARY MISSIONERS
The Mass was followed by a reception at the Spalding Pastoral Center, where each missionary present spoke and a film on the history of Maryknoll was shown.

Father Gould served for 57 years in Bolivia. He returned to Bloomington in May and is now assisting at Holy Trinity Parish. Sister Joan, raised in St. Bernard’s Parish in Peoria, served at Maryknoll headquarters in New York and also in New Mexico.

“We’re all in mission,” she told the group. “We have a name, but we all have our part in the missionary life of the church.”

Also attending were Maryknoll Father Tom Henehan, Midwest coordinator for centennial activities, and Greg Darr, regional director based in Chicago. Dr. Susan Nagele of Urbana, a Maryknoll lay missionary who has served in war-torn Sudan, was unable to attend.

ART IS FATHER DONNELLY’S MISSION, TOO

While Father Bill Donnelly’s own missionary life is a fascinating story, the Peoria native is using his skills as an artist to share the lives and example of giants in the Catholic faith with the next generation.

Using colored pencils, magic markers, and extensive research, Father Donnelly has crafted graphic novels — he prefers the term over “comic books” — detailing the lives of heroes and heroines of his Maryknoll order as well as others, including Archbishop Fulton J. Sheen.

“I wanted to make known the interest he had in the missions,” said Father Donnelly of Archbishop Sheen, the media pioneer whose sainthood cause is being promoted by the Diocese of Peoria. On the cover, in addition to the blackboard made famous in Sheen’s television programs, is the quote “My greatest love has always been the Missions of the Church.”

In the 1950s, Father Donnelly attended Bradley University in Peoria with the intention of becoming a commercial artist. But his life took a different path when he was drafted into the Army, and began considering the priesthood.

He entered the seminary in Chicago and at age 32 was ordained a Maryknoll priest. For more than three decades he served in Guatemala, which was experiencing a civil war. From 1982 to 1990, he was the sole priest serving 55 Mayan villages, often traveling on horseback over mountainous trails to reach remote areas.

Father Donnelly, a former Maryknoll regional superior who now does mission education and promotion throughout the Midwest, estimates he baptized about 20,000 Guatemalans as he accompanied them in their struggle for peace and justice.

He makes a point of emphasizing themes of peace and justice in his graphic novels. In addition to the Maryknoll novelette, he has illustrated the stories of Father Emil Kapaun, a U.S. Army chaplain who gave his life for others in the Korean War, and Father Augustus Tolton, a former slave who became the first black priest in the United States.

Father Donnelly is currently working on “The Life of Kateri Tekakwitha: The Lily of the Mohawks.”

While the stories are gripping, there is also room for a little hidden humor. For example, in the Sheen book is a panel of an adult and a child looking at television in a department store window.

“This is me,” said Father Donnelly, pointing to the boy. The adult was his Uncle Joe.

“The Life of Archbishop Fulton Sheen” is available through the Archbishop Sheen Foundation. Call (309) 671-1550 for ordering information.