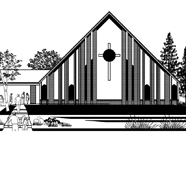 Photo Caption: A preliminary sketch of the proposed new Immaculate Conception Church in Manito as seen from South Adams Street.

MANITO — Members of Immaculate Conception Church here hope to “raise the roof” in more ways than one when they host a Harvest Hoe-Down Dinner and Auction on Saturday, Nov. 19.

The event is a fundraiser that will bring them closer to building a new church and parish hall. It will begin with a Harvest Mass at 4:30 p.m. at Immaculate Conception Church, 505 S. Adams.

The social and dinner that follow at the Forman Center, 308 S. Harrison, are sold out, but everyone is welcome at the silent and live auctions that will begin at 7:30 p.m. A cash raffle is also planned with a grand prize of $10,000. In addition, one lucky guest will go home with a new scooter.

Manito Catholics have been hoping to build a new church for more than 15 years and the need is growing, according to Father David Whiteside, pastor of Immaculate Conception and St. Patrick’s in Havana.

EVANGELIZATION TOOL
“The building itself is falling apart. When it rains, it rains on the inside, too, sometimes,” he told The Catholic Post.

Like many churches built in the 1970s, Immaculate Conception is essentially a large hall with the sanctuary tucked into one corner. Father Whiteside said the sacristy is a walk-in closet so preparations for Mass take place in the kitchen. The confessional is in the furnace room, which also functions as a closet.

But there’s an even more pressing need, he said.

“The parish is growing. We are trying to do some evangelization and there seems to be more people coming to church now,” he explained. “We want to reach out to the fallen-away Catholics in the area eventually and we’re hoping that the new church will be an evangelization tool.”

The theme for the building campaign emphasizes that focus: “A New Church, A New Beginning.”

Father Whiteside understands that those who stopped coming to Mass may have been hurt by something in the past, but noted that this is a way to say, “Let’s start over again and have a new beginning as a community and kind of invite people to come back to church.”

DREAM COME TRUE
As designed by architect Bradley P. Hoffman of Loves Park, that “invitation” will be a 7,990-square-foot church and parish hall separated by a large narthex or gathering space. The church will have two working sacristies and seat 177 people.

Because the back wall of the church will be made of glass, additional seating can be set up in the narthex, if necessary. Father Whiteside said this space will also be equipped with audio so that what is happening in the sanctuary can be heard clearly.

The parish hall will be large enough to accommodate religious education classes as well as parish functions.

Father Whiteside eventually hopes to add a rosary garden and grotto of Our Lady of Lourdes in the wooded area behind the parish hall.

The estimated cost of tearing down the existing structure and construction of the new church is $1.3 million. Father Whiteside said they have $600,000 in cash and pledges of $350,000 “and that’s only a third of the parish that has pledged so far. We’re getting there.”

If all goes well they hope to start building next June and be able to consecrate the new church on Dec. 8, the Feast of the Immaculate Conception.

Father Whiteside said he and the parishioners have every hope that their
dream will come true.

“When I met with the bishop and he told me I was being moved, it was the one thing he told me he wanted me to accomplish,” said the priest, who took up his new post a year ago in August. “I think it was really helpful for them to hear that the bishop wanted it and that’s what’s making them more confident than ever that it’s going to happen.”